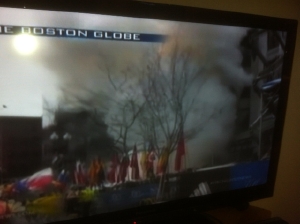 At around 3pm east coast time Monday two bombs exploded near the finish line of the Boston Marathon. At last word, three were killed and more than 140 injured. We checked to see if any of the running community of the Eastern Sierra might have been there. Andrew Kastor, Head Coach of Mammoth Track Club and in close touch with the event, said that one Mammoth man was there as a commentator and Olympic runner Meb Kflezighi was there, although not racing due to an earlier injury. No one from here, he said, was hurt.

Kastor said Josh Cox of the Mammoth Track Club was at the Boston Marathon as a commentator for Universal Sports. He said Cox, who has 56,000 twitter followers, also went to work telling families of runners how to deal with the situation after the two explosions.

Kastor said his phone was ringing off the hook yesterday and emails and tweets were flying in from those concerned about who might have gone to the marathon. He said the last two major marathons were struck with tragedy – the New York Marathon was dealt a blow by Hurricane Sandy. Kastor said, “That was an act of God. This incident in Boston was an act by someone who thinks he’s God.” In the face of this tragedy, he said it’s important to keep going forward. “Nobody stops us,” said Kastor. “That’s the mentality of the distance runner.”

Mammoth Mayor Pro Tem and runner Rick Wood did not go to the Boston Marathon. He said he had just run the LA Marathon four weeks ago and was not ready for another one. Wood said, “This is such a terrible thing. I think of the running community, and people who do this are by and large good people. They are working hard to try to achieve a personal best. What a terrible thing to happen.”

Andrew Kastor said the Mammoth Track Club would dedicate its practice Tuesday morning to the fallen victims. He said, “We’ll complete a couple of laps and observe a moment of silence.”

Thanks for posting this Bennett. I’d been wondering about our local runners. Such a terrible, terrible act. Concentrating on the helpers, first responders, simple acts of courage seems the like the best antidote for the night.