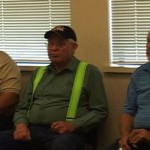 All three “demonstrated professionalism, skill and aviation expertise by maintaining safe operations for 50 or more years.”

Nikolaus’s instructor was Bob Symons, the holder of many glider records, and soloed in 1957 in a Piper Tri-Pacer out of Bishop Airport. Over the years he bought and fully restoed a Stinson 308-e, a 1941 Beechcraft Staggerwing and a Spartan Executive Model 12, a tricycle-geared aircraft, serial number 1. Nikolaus holds a private pilot certificate with single-engine land and sea ratings.

Philbrick’ father, Clyde, was his flight instructor. He soloed in 1964. Fifty-one years later, he holds a commercial Pilot Certificate with ratings for single and multi-engine land, instrument airplane and glider. Philbrick’s passion became his profession. He earned a Bachelor of Science degree in Aeronautical Engineering from Cal State Technical College and has owned Hangar One Aero Service at Bishop Airport since 1984. He has logged 11,500 hours in the air and 3,750 hours of flight instruction.

Mike Rossi got hooked on flying as a boy after a flight in an old bi-plane that took off out of a field near Big Pine. He learned to fly in a Piper Tri-Packer at Lone Pine Airport and soloed in 1961. Since then he has earned a commercial pilot certificate with ratings for single engine land and instrument and has more than 4,000 hours of flight time. His first plane was a Tri-Pacer, then a Cessna 150. In 1964, he bought a Cessna 172 that has been hangared in Bishop for the last 50 years.

The three recipients received certificates and lapel pins and have their names listed in the FAA’s Wright Brothers Master Pilot Award roll of honor. Supervisor Rick Pucci was on hand to present Nikolaus, Philbrick and Rossi formal congratulatory certificates from Inyo County.

Congratulations to all, and especially to Mike Rossi, who gave me my very first ride in a small plane, many years ago. We flew south down the valley and I got my first view of Manzanar from the air, as well as a much better concept of the volcanic nature… Read more »