As California launches the most ambitious clean energy program in the nation, locally the High Sierra Energy Foundation makes its own progress. 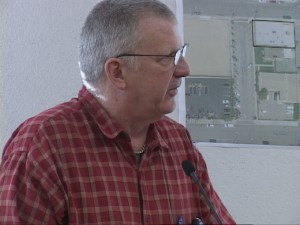 Rick Phelps of that foundation talked to the Eastern Sierra Council of Government members about the Eastern Sierra Energy Initiative – work to change out lights and to find other ways to save energy. Phelps said his group has support from local governments and has partnered with Southern California Edison in this work.

Phelps did say that the biggest problem is the state budget shortfall and delays hiring bureaucrats to evaluate their plans for funding. Phelps also said that he has not been able to get LADWP involved.

Phelps said he asked DWP to take part in an energy education project at Home St. Middle School in Bishop, but the Department declined.

The Council of Governments agreed to send a letter to DWP, supporting the High Sierra Energy Plan. Supervisor Susan Cash said that perhaps the program had not reached the right ears. She pointed out that DWP is putting forward its own renewable energy plan, so the Eastern Sierra programs fit.

We work to provide daily news to all of the Eastern Sierra, in the tradition of Eastern Sierra News Service and the Sierra Wave. We bring you daily happenings, local politics, crime, government dealings and fun stuff. Please contact us.
View all posts by News Staff →
Big Media, Holiday Visitors Make the Inaugural Flight into Mammoth-Yosemite Airport
New Rules for Dog Owners at Shady Rest Campground