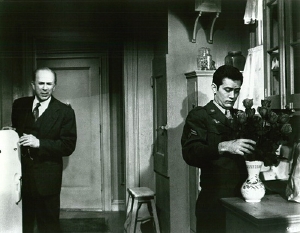 “The Subject was Roses” won a Pulitzer Prize and focused on the deep truths of families.

Playhouse 395 brings “The Subject was Roses” to the Inyo Council for the Arts Theater on November 29. Buy your tickets now for this moving interpretation of Frank Gilroys award-winning play. Set in 1946, Roses speaks to universal themes experienced by families and does so with stunning precision. You won’t want to miss this years finest dramatic production.

Ticket prices opening night are $12; $15 for all remaining shows.

Due to sensitive subject matter, this play may not be suitable for small children.

The play premiered on Broadway at the Royale Theatre on 25 May 1964, starring Jack Albertson, Irene Dailey, replaced by Martha Scott for the national tour; and Martin Sheen, and directed by Ulu Grosbard. A major critical and commercial success, the play ran 882 performances and was nominated for five Tony Awards, winning two for Best Play and Best Featured Actor (Albertson). For his work in the play, Gilroy won the year’s Pulitzer Prize for Drama. Columbia Records recorded the complete play in a recording studio with the original cast members and released it as a double-LP set.

In the published script, Gilroy included a day-by-day journal he titled, About Those Roses or How ‘Not’ To Do a Play and Succeed. According to the journal, “The Subject Was Roses opened on Broadway with a producer who had never produced a Broadway play; a director who had never directed one; a scenic artist who had never designed one; a general manager who had never managed one; and three actors who were virtually unknown.”[citation needed] Additionally, the play opened after all of the award deadlines, so it was not eligible until the following year, triumphing over Neil Simon’s The Odd Couple, Murray Schisgal’s Luv and Edward Albee’s Tiny Alice for the Tony Award, the New York Drama Critics’ Circle Award and the Pulitzer Prize for Drama. During the play’s two year run, The Subject Was Roses played five different Broadway theaters and Dustin Hoffman became a replacement stage manager and understudied the role of Timmy.

We work to provide daily news to all of the Eastern Sierra, in the tradition of Eastern Sierra News Service and the Sierra Wave. We bring you daily happenings, local politics, crime, government dealings and fun stuff. Please contact us.
View all posts by News Staff →
Get movin’
Mammoth Chamber news
1 Comment
Newest
Oldest Most Voted
Inline Feedbacks
View all comments