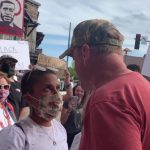 A few local detractors of the “Black Lives Matter” movement sought to sow fear and upset before protests scheduled in Bishop and Mammoth Lakes using social media platforms. The hope was apparently to “mobilize groups” to “counter the protests” and prepare locals to, in some cases, “lock and load.” Even now, days after the protests, a few are still peddling divisive rhetoric and untruths online. 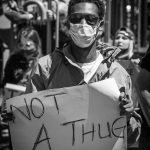 At Mammoth Lakes on Saturday, Lee Thomas is not a thug or a looter or a rioter or antifa. But he is a target of racism. (Photo by Dakota Snider)

Most of the rumor-mongering was on local social media platforms (primarily on Facebook) which is where local authorities first heard of concerns coming from citizens alarmed about what they were reading online. Those promoting the falsehoods often used the term “from a reliable source” to make a convincing argument, yet never provided a credible, verifiable source of their sources of information. 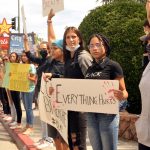 Young demonstrators at BLM Protest in Bishop on Tuesday, June 2, 2020

Despite the attempts to derail the protests with false narratives of “domestic terrorists” such as “antifa” coming to the area, there was a successful “Black Lives Matter” protest held in Bishop on Tuesday, June 2, with approximately 130-140 protesters, and yet another very successful BLM Protest March on Saturday, June 6, in Mammoth Lakes with an estimate 600 marchers.

What is antifa exactly? The ADL describes antifa (short for “antifascist”) as a loose collection of groups, networks and individuals who believe in active, aggressive opposition to far right-wing movements, which also include neo-Nazis and white supremacists. Most established civil rights organizations criticize antifa tactics as dangerous and counterproductive.

Sierra Wave went directly to the County Sheriffs and the Chiefs of Police in Bishop and Mammoth Lakes, as well as the state police, i.e. California Highway Patrol and asked:

“To your knowledge, was there ever any credible source of information from a legitimate agency that would have indicated in any way that a busload of “looters, rioters and Antifa members” were taking time out of their busy day down south from looting and destruction, to come all the way up here to disturb the peace at the rally in our towns? Or was this all Facebook nonsense?”

This is what they wrote back, which speaks for itself:

My intent was to allow the protests to take place, be available to assist the PD if needed, and allow people to exercise their constitutional rights. -JH 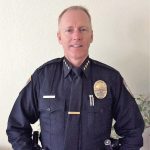 From Chief of Police Ted Stec, City of Bishop Police—

Before the date of the protest, a person was posting on FB (Facebook) that Antifa was on its way.  He gave updates.  People in Bishop became afraid.  Some businesses prepared to close and did so.

With help of the CHP, we investigated, which seemed to disprove Antifa, agitators, buses, vans, etc. were en route.  We reached out to the person, who said that he was just joking. The posts were edited to reflect that.

Even though we did not have credible information of agitators coming to town, it was still our duty to prepare a deployment plan so we wouldn’t get caught flat-footed on any trouble that might occur.  We do the same for Mule Days, parades, graduations, etc. -TS 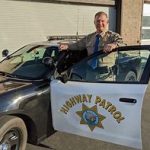 As for the bus loads: I had not received any credible information that anyone was traveling to Bishop area to protest.  I worked with other law enforcement agencies that were tracking social media posts claiming people were being bused in.  CHP worked with other CHP areas to attempt to locate the bus sightings described only on social media.

All efforts, including posting units on 395 were unable to substantiate these posts.  Ultimately, we canceled the efforts and remained focused on securing state properties and being available to assist BPD. -TL 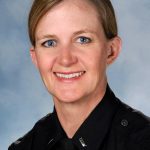 We had no credible information that any outside groups were coming up to Mammoth. There were rumors, but nothing substantiated. And, as I was at the Mammoth protest, I did not see anyone try to stir anything up. It was very peaceful. -IB

My first comment would be, CHP officers are police officers and have police powers anywhere in the state, not just state highways.  Second, LE agencies in the Eastern Sierra rely on each other for assistance.  We call it mutual aid.  We help each other on a regular basis, daily in most cases.  Usually backing up other officers etc.

Second, how do you determine credible?  I had heard of a FB post as mentioned for the Bishop event.  It appears the reason the event coordinator canceled the event.  Some continued to demonstrate on their own.  Great!

So, when planning events, such as Night of Lights (and many more in Ventura) I always plan for the worst-case scenario and hope for the best.  The primary idea is to keep the public safe, either through presence or if violence does break out, we can respond quickly and quell it.

For our event we had additional resources available nearby.  Fortunately, they were not needed.  Again, great.  We had a good time helping our march make it through town.  It was a tremendous community event, one that was much needed for our Town.

Bottom line, both events went off well.  Additionally, some of our young people learned they can peacefully demonstrate for their beliefs! -AD

Humor, especially sarcasm, doesn’t always come across as intended online. Whether this was intended as a joke or not, FB has become a cesspool for misinformation. I gave up on it several years ago.

Erich
Come on,man !!
A better chance made by locals totally against the protests and the BLM movement. either looking and hoping for trouble,so they’d sit back with a smart phone,taking pictures,and then blaming the protesters if something were to happen.

Alopez The looters,the ones causing those problems weren’t protesters.They were opportunists,taking advantage of a situation….all colors…black,brown,white. But just a way for some to blame the protesters and to bring in the National Guard,for church photo-ops as well as breaking up what was peacefully protesting. I watched a lot of the… Read more »

You’re 100% sure about that right? I highly doubt that. Do you need to stop watching fake news. My guess is you’ve been indoctrinated. And quit regurgitating what fake news say with the photo op, it’s pathetic.

A Lopez Are you talking about that photo-op that since,the uniformed Military personal,as well as the National Guard Soldiers that participated in that farce have since openly apologized for being lied to and dragged into that morning ? Was that “fake news”,what we saw with our own eyes and heard… Read more »

If you are responding to a craigslist ad paying for social disturbances or looting, you are in violation of AB5 and should now register with the California legislator Lorena Gonzales down in San Diego.. actually please head down there to speak with her personally

At least his true name should be revealed.

We respect “anonymity” even though it comes at a cost. In this particular instance, the poster was engaging in satire, which is not well understood by many readers, several of whom unfortunately, took it seriously. Why anyone would take a Facebook posting (or at least most them) serious is confounding.… Read more »

The focus should be on the absurdity of people thinking antifa would even bother coming to a place like this. It’s as bad as when 9/11 happened and people thought the taliban was going to attack. Get a grip on reality folks.

The hilarity of this all is that people actually thought Antifa had any interest in coming to a place like Bishop. The sad part is that it was young people peacefully protesting and local idiots were threatened by this. Those locals should be ashamed of themselves. We should support our… Read more »

The deliberate misinformation to foment hate and spread fear can lead to tragic consequences such as almost occurred with this story about a multi-racial family on a camping vacation were followed and threatened by men with rifles. There is no excuse for this. Even “joking” about it can have serious… Read more »

Tinner, thanks for sharing this. It was informative and interesting…and nothing like what we experience here in our communities! Most of us have no idea what’s happening in Chicago year-round. It’s a very violent city by comparison to others. One compelling comment made in the article was: In (Pastor Donovan)… Read more »

Facebook posts are public. I say name and shame the locals agitating for violence.
“Joking” my left buttcheek.

I hope the person making the “joke” on Facebook gets a bill from the law enforcement agencies who wasted their time checking it out.

If anyone was stupid enough to think antifa had any interest in coming to Bishop, they really need to turn the news off.

Almost Native I’m thinking soon the poop is going to hit the fan with the ongoing protests,some saying and trying to force the now peaceful protests to end,saying “enough is enough…move on “. Some will say it’s “hurting the economy” ,taking away resources,blocking roads…seems some are already thinking that way,kind… Read more »

People have a right to protest and honestly I think if I was of a different race or even in a different city I probably should be out there supporting their peaceful rights to do so. I just hope we all don’t end up feeling forced to turn a blind… Read more »

Don’t forget that our freedoms don’t come FREE! They are fought and protected by men and women with guns. Look at history. America is the last stand for freedom and it doesn’t come free.