By News Staff on September 4, 2012 in Government Agencies/Utilities 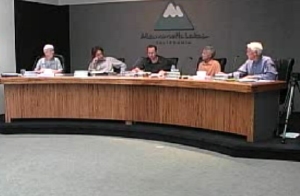 In August, Mammoth people heard from their officials that the dreadful $43 million lawsuit judgment debt was settled. A press release told how the court-ordered mediation resulted in a tentative agreement on a settlement with Mammoth Lakes Land Acquisition and developer Terry Ballas. So far, officials have declined to reveal the dollar amount and terms of the proposed settlement. Tonight, the Town Council will offer what they are calling a community update on the tentative deal.

The Council scheduled a closed session at 4pm on the bankruptcy issues. The first item on the open session agenda of this regular meeting is the community update on the tentative settlement. Last week, Town Manager Dave Wilbrecht said only that as in any process there are general terms of an agreement and then details that have to be crafted. He said, “High level decisions are discussed and agreed on. Details are being worked out – terms and conditions.”

Wilbrecht did add that the Town’s hired legal teams are sorting out all of the details and the next steps. The Town’s August press release said that the agreement details will remain confidential until it is “fully documented and executed.”

The Town’s filing in U.S. Bankruptcy Court is still there, and the schedule of hearings is on hold as the two sides attempt to work out a final settlement. The Bankruptcy Judge will have to approve the deal before it is final.

Again, officials will talk about this issue at tonight’s Mammoth Town Council meeting.

Until someone comes forward to change the present predicament (it is not illegal to accept bribes, monies, favors, kickbacks, etc.) the system we have in place will always be open to corruption. Forms of corruption vary, but include bribery, extortion, cronyism, nepotism, patronage, graft, and embezzlement. And boys and girls… Read more »

Does Terry Ballas still work for the town of ML?

He never did. Terry Ballas is the developer who entered the development agreement with the Town back in 1997 for development of condos, etc. at Mammoth Airport. He still holds at least a portion of that still active DA. I believe MLLA also holds part of it. This is part… Read more »

But is he not the existing FBO or fixed base operator?

If he still has an interest in Hot Creek Aviation, yes.
BK

Volunteer to give up all pay and benefits until the settlement is paid in full or resign!

Better yet.. Resign …Then give back all past pay and benefits.

A settlement are you kidding me? Are they saying we we’re again lied too and we are not broke? I have a sneaky suspicion as an encore will soon see another Measure YOU! It’s time for a Measure US! The town council should volunteer to share in the pain! Give… Read more »

“When all is said and done with the settlement, then its time for our two Councilmembers who were on Council when most of the decisions were made to resign. ”

and if they do not
RECALL THEM.. What are you afraid of Mammoth Lakes?

not sure if people in Mammoth Lakes are scared, I think they just don’t care. And if they care, they feel powerless. Same story in every city…country.
Isn’t that the whole point to politics anyway?

In today’s political culture, too many people believe they are doing their “patriotic duty” by simply listening to Rush Limbaugh demonize “liberals” aka Democrats, 3 straight hours a day, 5 days a week, and reruns on weekends. In between, they “catch up on the news) by watching Fox News do… Read more »

I concur with “H” totally.
Mr. Eastman and Mr. Wood have been in the middle since day one.
This is no mystery to anyone.
Resignations are most certainly in order.

When all is said and done with the settlement, then its time for our two Councilmembers who were on Council when most of the decisions were made to resign. These two individuals can blame staff, attorneys, and anyone else they want but ultimately they voted for and directed all actions… Read more »