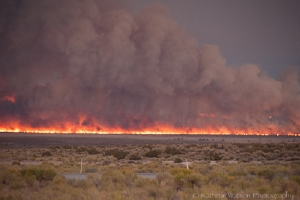 Kathryn Watson of Mammoth Lakes caught these scenes of the Indian Fire with flames rushing along the ground and dramatic cloud formations above. 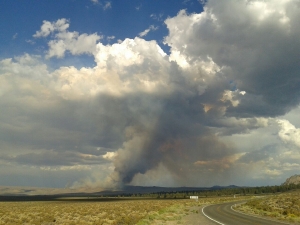 The lightning caused Indian Fire, burning southeast of Mono Lake on Bureau of Land Management public lands, has now consumed 5,000 acres of grass and sagebrush, and is considered 30% contained.

Crews have continued to actively pursue the suppression of the Indian Fire, with approximately 100 people currently committed to that effort.   This afternoon the ‘on-the-ground’ engines and handcrews are being supported by two airtankers, two helicopters, one lead plane and two air attack planes.

The fire is currently burning in a north easterly direction.  Members of the public are reporting seeing two plumes of smoke in the area, but there are not two different fires – it is just two different fronts of the Indian Fire.

Temperatures are high and humidity is low, but the relatively easy terrain is helping crews and dozer operators with the construction of containment lines around the fire.

The Indian Fire was ignited by a lightning strike from the thunderstorm that passed through the Eastern Sierra Wednesday afternoon.  Although no structures are located in the area, the fire is burning in sage grouse habitat and crews will continue to aggressively suppress it. 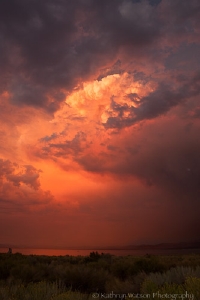 A thunderstorm that passed through the Eastern Sierra Wednesday afternoon ignited a lightning fire about five miles southeast of Mono Lake, north of Highway 120,  on Bureau of Land Management public lands    The Indian Fire is burning in sagebrush and grass and is currently about 1,000 acres.
The Indian Fire started at about 2:00 Wednesday afternoon, and as of 9:00 p.m. is 15 % contained.  Crews initially hit the fire hard and were supported by four airtankers, two helicopters, an air attack and a lead plane. 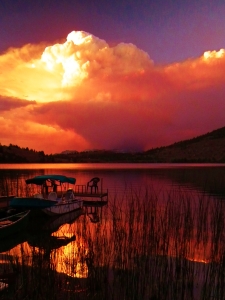 Thunderhead being pushed up from the heat of the brush fire off hwy120 east from June Lake.  Photo by Tom O’Keefe.

Although no structures are located in the area, the fire is burning in sage grouse habitat and crews will continue to aggressively suppress it.

We work to provide daily news to all of the Eastern Sierra, in the tradition of Eastern Sierra News Service and the Sierra Wave. We bring you daily happenings, local politics, crime, government dealings and fun stuff. Please contact us.
View all posts by News Staff →
Town of Mammoth and MLLA: mediation talks continue
Cool cat and blue roan Miracle
2 Comments
Newest
Oldest Most Voted
Inline Feedbacks
View all comments

Be safe out there firefighters.