The Eastern California Museum in Independence will unveil its newest exhibit, Life on the Lake, on Saturday March 5, from 2-5 p.m. 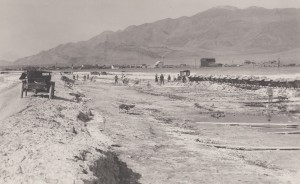 Men working in the evaporation ponds at Natural Soda Products, outside of Keeler, about 1920. Eastern California Museum photo.

The photo exhibit combines contemporary and historic photos of the Owens Lake to explore its “recent” transformation from an active industrial location to a source of hazardous dust to a budding bird and wildlife sanctuary.

Starting in the late 1800s, the shores of the 100-square mile lake south of Lone Pine were home to numerous mining and shipping endeavors. A smelter at Swansea converted the silver and lead ore from the Cerro Gordo mining camp into ingots that could be shipped on the steamship Mollie Stevens. North of the lake, less glamorous minerals – marble and talc — were discovered and mined.

Those mines were consistent producers into the mid-20th century. In the early 20th century, the lake shore also served as the terminus for the famed Saline Valley Salt Tram. 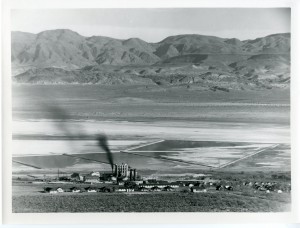 The California Alkali plant, next to Cartego, about 1925. Eastern California Museum photo.

The lake’s natural soda and soda ash deposits attracted sprawling mining operations that collected the soda/trona. Large evaporation ponds were laid out on the lakebed and the sun baked away the water to leave the soda, which was then collected and processed on the lake before being shipped to market.

These mining and processing operations were located near Keeler and Cartego and on the western shore of the lake. Although most of the mines were closed by the 1960s, Rio Tinto Minerals maintains an active mine on the lake today.

In the exhibit, the lake’s mining history is captured using the museum’s historic, black and white photos of the various mining and processing operations on and around the lake.

The 20th Century also saw another development on the lake, the creation of the “Owens Dry Lake” and the arrival of stinging, massive dust storms. The Owens River fed the stagnant lake until 1913 when the river water was diverted into the Los Angeles Aqueduct. The lake’s water level slowly receded until it had become an inhospitable, 100-square mile eyesore and dust source. 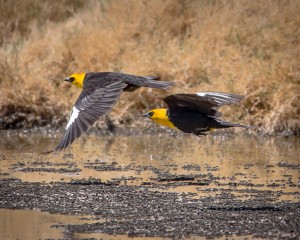 A pair of Yellow Headed Blackbirds in flight on the Owens Lake. Photo by Robin Black

By 2000, the lake was the largest single source of fine dust (PM10) pollution in the US. Aggressive application of air pollution standards compelled the Los Angeles Department of Water and Power to begin another massive industrial undertaking on the lake: Mitigating and eliminating the dust. Today, after spending more than $1 billion dollars (yes, billion with a “b”), the Owens Lake is a landmark dust control operation. About half the historic lakebed, roughly 50 square miles, have been “treated” to reduce dust. Those methods include gravel overlays, plowing huge furrows in the lake bed to break up the wind, and planting salt grass and native vegetation.

But it is the most expensive dust-control option, re-watering sections of the lake, that has created the most noticeable, and vital change to the once barren landscape. When the water arrived, so did the birds. And not just a few birds, thousands of birds stop by each spring and fall as they follow ancient migration routes.

In the past few years, up to 100,000 birds have been counted on the lake during peak seasons. 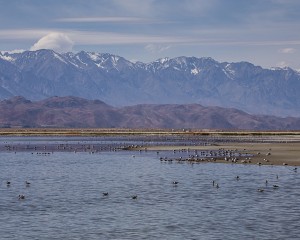 A flood control pond on the Owens Lake hosts birds and creates a scenic landscape, thanks to the Sierra in the background. Photo by Robin Black

And once the birds arrived, so did the bird fans. The lake has earned a spot in the hearts and on the maps of birdwatchers from across the country, who now flock to the lake to take photos, record sightings and enjoy this unique bird habitat. The birders are rewarded with some bonus sights, too, namely the lake’s majestic setting between the Sierra Nevada and the Inyo mountain ranges.

The lake’s latest incarnation is captured in color photographs by Los Angeles photographer Robin Black. She has captured sharp images of nine common, but colorful bird species who are regular visitors to the lake.

The exhibit also includes a selection of landscape photos that present the drama of the turbulent skies above the lake, the striking Sierra range that looms above the lakebed, and the contrasts presented by a once dry lakebed that is now enjoying, and responding to life-giving water.

Many of Black’s photos in the exhibit first appeared in Second Chance: The Owens Lake Project at G2 Gallery, in Venice, California, a solo conservation photography exhibit, with partner Audubon California.

The Eastern California Museum is located at 155 N. Grant St., three blocks west of the historic courthouse in Independence. For more information, call 760-878-0258, or check the Museum’s Facebook page or webpage, at www.inyocounty.us/ecmuseum.