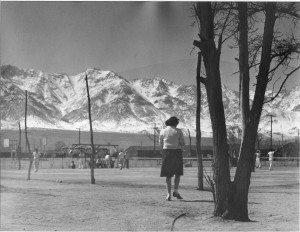 The exhibit “Personal Responsibility: The Camp Photographs of Toyo Miyatake” will open on Saturday, April 7, at the Eastern California Museum in Independence. The exhibit features more than 70 black-and-white photos by Toyo Miyatake, showing many aspects of life in the Manzanar Relocation Center during WW II. There will be a brief presentation at 2 p.m., and light refreshments will be served throughout the day. The Museum is located at 155 N. Grant St., in Independence, and is open from 10 a.m. to 5 p.m.

Miyatake was born in Japan and moved to American with his family when he was 14. Before being interned at Manzanar, he had become a well-known and highly respected photographer in Los Angeles. His photographic work at this time included traditional portraits along with cutting edge, modern photography. He became friends with the famous, modern-art photographer, Edward Weston. Several photos in the exhibit reflect Miyatake’s artistic style during the pre-war years. His use of light and composition enhanced his reputation as a fine art photographer, and lead to his photos being featured in numerous exhibits in the U.S. and abroad.

In 1942, the Miyatake family, which included Toyo and his wife and children, and other members of his immediate family, was interned at 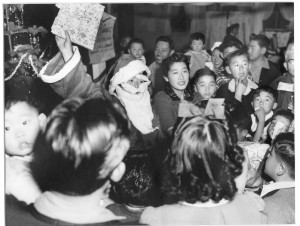 the Manzanar Relocation Center. Toyo Miyatake later said he felt it was his responsibility to document camp life. Internees were not allowed to bring cameras to camp, but Miyatake had smuggled into camp a camera lens and film. His first camp photos were taken using a wooden, box camera made by a carpenter in camp. In some of these photos the “light leaks” coming through the camera can be seen. Film and other photos supplies had to be snuck into camp.

His old friend Edward Weston knew Camp Director Ralph Merritt, and convinced Merritt to allow Miyatake to use his own photo equipment. But a white camp staff member still had to actually trip the shutter. Eventually, that restriction was lifted and Miyatake established a photo studio and he and other photographers documented camp life for the Manzanar Free Press newspaper. Miyatake and his family remained in Manzanar until the end of the war.

The photos in the exhibit include scenes of daily life at such locations as the fish market and the general store. A large number of photos show the children at Manzanar, going to school, dancing, lining up at the “toy exchange,” and playing. Scenes of the barracks, picnics and musical events, are included, along with photos of machine shop, the flower shop, the newspaper office and other aspects of camp life. Some of the most powerful and moving photos are portraits of the internees, which capture a wide range of emotions, from stoic resolve to the pain of a mother whose son volunteered for the U.S. Army and was killed in combat.

Miyatake’s photos of Manzanar have been included in many books, and are often likened, in quality, technique and storytelling, to Manzanar photos taken by contemporaries such as Ansel Adams and Dorthea Lange. Miyatake’s work and Ansel Adams’ Manzanar photos were shown together in the exhibit, “Two Views of Manzanar.” Photos by Miyatake, Adams, Lange and Clem Albers are also featured in the book, “Elusive Truth: Four Photographers at Manzanar.”

After the war, he returned to his studio in Little Tokyo. The museum-quality prints in the exhibit were created by Toyo’s son, Archie, who took over the Miyatake Studio after his father retired in 1976. Funding to purchase the photo prints in the exhibit was provided by a California Civil Liberties Public Education Program grant in 2000. In 2011, Toyo Miyatake’s many contributions to his community and to photography, before, during and after his internment in Manzanar, led to him being honored and remembered by having a street in Little Tokyo named Toyo Miyatake Way, and the installation of a bronze relief of the photographer.