By News Staff on August 20, 2014 in Government Agencies/Utilities 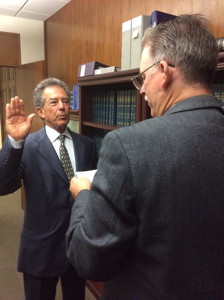 When Mayor Eric Garcetti was elected, he promised to reform the Department of Water and Power.  That work started with his appointments to the LA Water and Power Commission with former Congressman Mel Levine as the President of the Board.  While in Congress Levine was active in the establishment of the Manzanar Historic Site.  He is viewed by some as a friend to the Owens Valley.  Below is an LADWP press release on Levine’s reappointment:

LOS ANGELES — The Los Angeles City Council yesterday adopted Mayor Eric Garcetti’s reappointment of former U.S. Congressman Mel Levine to the Los Angeles Board of Water and Power Commissioners. Levine, who was first appointed to the commission in August 2013, will continue serving on the board through August 2019.

Levine is currently President of the Board, re-elected to the post by his colleagues earlier this month, along with Vice President William Funderburk. Both will hold their positions for another year.

According to City Council President Herb Wesson, “Mel Levine has been an effective commissioner and we are grateful for his leadership and his willingness to take on this important assignment.”

Felipe Fuentes, Councilmember of the 7th District and Chair of the Council Committee on Energy and Environment said, “I’m very excited about Mel Levine’s reappointment. The challenges that the LADWP is facing underscore the need for a steady hand and firm management of resources while being cognizant of the ratepayers’ interests. Mr. Levine has done a great job at the helm over the last year, and I’m excited about this willingness to continue his stewardship to the city of Los Angeles.”

While speaking before the entire City Council, Mr. Levine said, “My colleagues and I are focused on ensuring the sustainability of L.A.’s water and power while also keeping the lights on and the water running. I commit to working hard to tackle LADWP’s challenges, turn it around and once again make it a standard for all U.S. utilities to look up to.”

He has served as U.S. Chair of the U.S.-Israel-Palestinian “Anti-Incitement” committee established by the Wye Plantation peace agreement, as a Presidential appointee to the United States Holocaust Memorial Council, as a U.S. government appointee to the U.S.-Israel Science and Technology Advisory Commission, as President of the American Friends of the (Yitzhak) Rabin Center in Israel, and as Board Chair of the Los Angeles Police Foundation.

Mr. Levine’s Congressional committee assignments included the Committee on Foreign Affairs, the Committee on the Judiciary, and the Committee on the Interior and Insular Affairs. He served as Chair of the House Task Force on Exports. Mr. Levine founded and co-chaired Rebuild America, an educational foundation to improve American competitiveness by increasing support for high-technology industries, improving education and rebuilding infrastructure. Between 1993 and 1997, Mr. Levine served, at the request of Vice President Gore, as co-President of Builders for Peace, the private sector effort to assist the’ Middle East peace process.  His legislation included restoration of the Santa Monica Bay.

In the California Assembly, Mr. Levine was chair of the Energy subcommittee and author of California’s Conservation Tax Credit legislation and California’s Solar Rights Act.

The Department of Water and Power is the nation’s largest municipally owned utility. The Board of Water and Power Commissioners establishes policy for the Department.  Commissioners are appointed by the Mayor and approved by the City Council. The Board, comprised of 5 members, meets regularly on the first and third Tuesdays of each month at 11:00 a.m.

We work to provide daily news to all of the Eastern Sierra, in the tradition of Eastern Sierra News Service and the Sierra Wave. We bring you daily happenings, local politics, crime, government dealings and fun stuff. Please contact us.
View all posts by News Staff →
Multiple units respond to brush fire south of Bishop
Old Timers’ Day & BBQ
1 Comment
Newest
Oldest Most Voted
Inline Feedbacks
View all comments

I didn’t think anyone graduated in 1969? What happen?