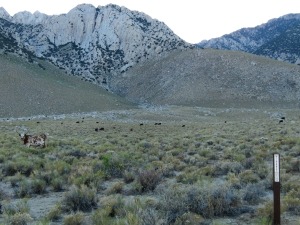 Cattle routinely graze in Inyo Federal Wilderness area, which are off limits to vehicles (often even on established roads). I walked an area above Cartago today that was otherwise pristine but for havoc wreaked by cloven hoofs on the delicate protective crust of Owens Valley floor and slopes.

Yesterday, I walked to the nearby Cartago Springs wetlands, also publicly owned (State of California) and it too is occupied by cattle (almost certainly without permit). Some Fish and Game people who manage the site think it should be the first place tourists from the south visit in Owens Valley,  but it’s nothing to send a postcard home about with its deep hoof prints and signature plops of manure.

According to this article:  http://www.mikehudak.com/Articles/Chesapeake9909.html,

“Livestock’s impact on the number of endangered species is approximately equal to that of logging and mining combined: 22% impacted by livestock, compared to 12% by logging, and 11% by mining.

Contrary to common thought western public lands do not supply a significant amount of U.S. beef. With regard to the 48 contiguous states, forage on western public lands accounts for only 2% of the total feed consumed by beef cattle, while beef cattle producers with federal permits represent only about 3% of the U.S. total. Even as a contribution to the economies of the eleven western states, public lands ranching is insignificant: providing only 0.06% of the jobs, and 0.04% of the income.”

And since the rule of the range is that cattle may gaze anywhere that is not fenced off, who knows how must destruction is wrought by future hamburgers without any compensation at all to taxpayer and citizens.

Similarly, land allegedly preserved in a natural state through DWP ownership is routinely leased for grazing. Some of the rarest and most fantastic locations in the Alabama Hills are desecrated by beef, and the ‘restored’ lower Owens River area has been increasingly trampled since the reluctant return of some water by DWP.

Have a cherished source of watercress  from an Owens Valley spring or waterway? Not so quick, for parasitic liver flukes that cattle host, encyst on watercress. If humans ingest these larvae, they too can get infected.

While Owens Valley residents may associate this place with romanticized Hollywood images of cowboys, the truth is that it is outdoors enthusiasts that stave off the specter of complete economic apocalypse here. And it’s hard to imagine nature lovers loving the sight of muddy trampled stream banks, or cow paddies and their associated annoying insect populations.

Perhaps it’s time to tell the government hands that took away the people’s land to keep the cows off?

Hey People like to see the cows on the side of the road and the occasional wrangler riding in the dust. Thats what people come up here for

Ron – I know some girls that come up to see the wranglers.. hee yaa!

Well, we better keep those decorative cows and cowboys on the side of the road, because the folks in their cars are sure not going to see them in the Sierra meadows…..

Pretty soon tree huggers are going to be the only thing allowed on our “public land”.

J.H……The public can go wherever they want to on THEIR public land…..What the “tree-huggers” object to is those that feel the need to open up every square mile of land to allow vehicle access.

Wayne – the tree-huggers aren’t happy with where vehicles are currently allowed. They want to take away our rights to lands that are currently open. Which is much different then opening up every square mile of land that is currently closed. I’m an avid off roader but I would be… Read more »

Hate to say it, but I have to agree with Rob on this one. They’re closing down roads left and right. The thing to remember, is that not everyone can just get out and hike 5 or 10 miles to a place they like to go. Some people don’t have… Read more »

Bob, I don’t know a lot of folks that are going to ride a cow to get there!

Ken, my point was addressing vehicle access and the closing of existing roads. Although it is slightly off topic to the main article, it is an issue that is near and dear to myself and others, on both sides of the equation. More debate, and information exchanged is a necessity… Read more »

Do you really think making absolutists statements about “tree huggers” is a realistic, intelligent, or articulate approach to such a complex issue?

Hmmm. Unclaimed property on public lands?? You like steaks?

Scott- I have found local ranchers to be approachable and friendly. I would suggest that when you find an area that is being mismanaged a call be made to the rancher to inquire about it. They would also probablly like to know about the dead calf too. Most leases on… Read more »

John- Thank for the input on this matter. I have conversed with local beef farmers before and once even tracked down the owner of an injured cow near my property. Based on my wanderings however, I’d say the matter of cattle trampling the landscape is too widespread to note an… Read more »

John- Speaking of contacting beef herders, back up above Cartago on Saturday I came upon a lone independent-looking cow with a large udder and set of horns. I don’t know if cattle crews return for stragglers, but perhaps a supporter reading this could let them know. An idea occurs to… Read more »

Mr. Barton, I agree we should end all taxpayer funded freebies to everyone. If steak costs $50/pound we’ll either pay it or eat something else. Mr. Palamar referred specifically to “DWP holdings”. Another thing some people might be unaware of, if you hit a cow with your vehicle, or one… Read more »

Interesting point Joan… I might point out that hitting a cow in your car, or said cow injuring itself on your property depends heavily upon where you live. Unless an area is designated as “Open Range” the owner of the offending livestock is responsible for keeping it contained. If said… Read more »

Grazing on DWP land is not technically grazing on “public lands”, and DWP has a different formula for how many animals can be on a specific area of land. Are you talking about DWP or Federal Lands? DWP is a private landowner. Mr. Palamar, I think it comes down to… Read more »

Joann- I specifically referred to BLM and FS, not DWP because tax payers are generally not on the line with management of private lands. Environmental degredation is one issue but the financial deficits of western public lands grazing is not publicized or well known. There can still be a cattle… Read more »

Much of what Scott writes is correct and well documented. We have fallen in love with the cowboy myth. What Scott doesn’t point out is the fiscal impact to the taxpayer who pays for the BLM and Forest Service range management personnel, and laborers who repair areas degraded by overgrazing,… Read more »

You’re correct, Barton. By manipulating the agenda driven reporting and placing it on paper, it is therefore ‘documented’. Erroneous documentation is still ‘documentation’, is it not? Arguing with facts is futile since the “anti’s” will only believe that which is told to them by other anti’s. In Central California, grazing… Read more »

It’s not the ranchers fault the forest service or blm can’t effectively manage the land at a reasonable cost. The FEDs are famous for not doing anything cost effectively, and the public isn’t going to put up with it any longer. It doesn’t matter if their managing grazing, logging or… Read more »

Wow, I am impressed at the quantity and consistency of responses to my ‘food for thought.’ I live up here because of the free access to vast wide open natural spaces made possible by non-private ownership. And I can sadly report that the lushest easily accessible spots are commonly trampled… Read more »

sounds like another do gooder who’s going to save the planet all by himself, even if that means getting all the ranchers who have lived here in the valley for generations to stop earning a living, not just earning a living but a way of life. and whats with the… Read more »

salblaster….I’m glad your not one to be leaving trash and beer bottles around the hills and trails when your riding your ATV,and I’m sure most locals respect our area the same way you do(I live in Lone Pine too)…But the same can’t be said about many out-of-area visitors to the… Read more »

I am fed up with persons who love our rural way of life, move here, and then try to change it. If you don’t like the way our area (Eastern Sierras) have been managed for hundreds of years then leave. The majority of ranchers, packers, and outdoors men do a… Read more »

I would rather have a cow for a neighbor than 90% of the people I’ve met.

How about neither as a neighbor?

American Ranching families do have access to preferred lands to graze their cattle. These lands are more suitable and are without controversy. With American ranchers such as in California being subsidized by the government it does no favors to American public land, the international markets, other grazing lands and smaller… Read more »

I think you’re a bit off base here Rube. Firstly, American cattlemen don’t recieve the same sort of subsidies farmers do. As it turns out, nearly all of the “subsidies” you speak of are basically insurance against natural disasters of one sort or another. So the only way these cattlemen… Read more »

We do not exist for the outdoor pleasure of some cone head who doesn’t understand. Should I complain about how the millions of vehicles on the road completely destroyed the pristine wilderness where LA is now. Cattle are our history, Many, many times over the years I have been stuck… Read more »

Home girl….GREAT POST!!!!!!….Back in 1984,on my honeymoon,when me and my wife were coming back from Bodie,the back way,on Conway Ranch Road,we were stopped by a large herd of cattle blocking our path…and thought how neat that was…..Can’t you just see that happening to Scott Palamar,the man that wrote this letter,and… Read more »

Well said. Also, some grazing is beneficial to natural ecosystems because they developed along with grazing animals.

In 2008, local rancher Ron Yribarren, was subjected to similar grazing prejudices due to a fungus that was killing the yellow-legged frogs. After a fiscal impact known only to Mr. Yribarren, it was found that the fungus was a naturally occurring event in the area and not attributed to the… Read more »

Scott Palamar..In reality,what your letter is trying to say is to why cattle are allowed on the land that people are not legally allowed to destroy with their ATV’s and other vehicles.And do you,or anyone else really believe the Mike Hudak.com article saying cattle,and their ‘”methane-laced” dung pose more of… Read more »

and put a few hundred people out of work in the process. Just what we need more unemployement.