By News Staff on October 30, 2017 in General Misc. Stories, Government Agencies/Utilities
Following is a letter to NFL Commissioner Roger Goodell from local residents Robert F. Waggoner Col. USAF (Ret) & Mrs Waggoner NFL fan.
Dear Mr. Goodell,
My wife and I have been NFL fans for many years.  Myself from the days of Johnny Unitas and SonnyJurgensen. 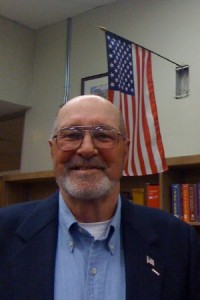 I am a retired USAF Colonel, with 26-1/2 years service.  Six and half years as a P.O.W., in North Vietnam.  I would like to relate a short story about a young Naval Officer who knew what the flag meant to him.
LTJG, Michael Christensen was born and raised in rural Kentucky, enlisted in the Navy as a seaman and rose to rank of LTJG, Naval Aviator.
He and I were sharing a large prison cell in the ‘Hanoi Hilton’, with 17 other  P.O.W.s during the early summer of 1972.  Mike found a soiled handkerchief, washed it and began making a flag, using a needle fashioned out of bamboo.  With thread from his blanket he made a crude flag.
We began pledging allegiance very early every morning before the guards came around.
However, a guard discovered us one morning and a few hours later performed a shake down inspection of our cell.  They found the flag in Mike’s bed.
He was taken from our cell and was beaten severely all that afternoon and night.  He was returned to our cell the following morning and was a mess.  He could barely see through his swollen face and eyes.
A few days later he found another piece of white cloth and began making another flag.  He knew what patriotism was all about.
Mike is no longer with us, but two of our cell mates, Senator John McCain and Congressman Sam Johnson from Texas can verify this story.
We will not be watching any NFL games until some action is taken by you and the NFLPA.
I suggest those that do not want to honor our flag, remain in their locker room (like children being punished) until the ceremony is complete.
We request this letter be sent to all franchise owners and GMs.
Sincerely,
Robert F. Waggoner Col. USAF(Ret) & Mrs Waggoner NFL fan.

Low-Inyo
Reply to  For consistency:

“I like people that agree with every stupid thing I say or try to come up with….and people that like to follow me around and kiss my but ”

Thank you for reaffirming for me what the late great Frank Zappa once said:

“You know people, I may not be Black but there sure are lotsa times I wish I could say I’m not white.”

From “Trouble Every Day” on Freakout! album.

I admire Mr. Waggoner and have had the prevledge of listening to him speak at the Vetnam Memorial here in Bishop . I am glad he wrote this and hope his story helps the younger generation learn more about our countries past . I hope Mr. Waggoner will write a… Read more »

“NFL players that choose to talk about it are stating it has nothing to do with respect for our Country and the flag”. Wrong. It has everything to do with the respect for this country. When you kneel in protest, or shame, or for whatever grievance you have nurtured in… Read more »

Sonny Jurgensen played for the Washington Redskins. The Washington Redskins were the last NFL team to “allow” African-Americans to play football for them, in 1962. And the Redskins integrated reluctantly – only when their owner, Confederate-sympathizer George Preston Marshall, was pressured into doing so by the Kennedy administration. Mr. Marshall,… Read more »

Bobby,the only thing in play with this here is a big mouth so-called “president” stirring the pot,trying to divide,and thinking he’s going to run the NFL like he does his annoying,scripted reality shows,never mind the fact,when the players choose to kneel,it has NOTHING to do with dis-respecting the flag.And I’m… Read more »

…A touchy subject here,and can definatally understand how Veterans and Military families are bothered by the kneeling during the National Anthem….but also have to realize some of the NFL players that choose to talk about it are stating it has nothing to do with respect for our Country and the… Read more »

So called President of the United States? Really? I was never a fan of President Obama’s policies nor his fundamental political philosophy but he was my President regardless of that those differences. I respected him as the President and I respected, and still respect, the office of President irrespective of… Read more »

Steve,I highly doubt my Brother would’ve had much respect,if any, for trump,and for the life of me can’t figure out how ANYONE with a Military background,whether a Military Veteran or currently serving in the Armed Forces can have any respect for, not only a draft dodger,but someone that disrespects Veterans… Read more »