By News Staff on March 3, 2014 in Government Agencies/Utilities 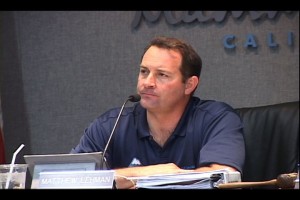 Councilman Matthew Lehman sat in the Mammoth Town Council Mayor’s seat as the Town wavered close to bankruptcy last year. They were tough times and full of almost daily meetings. At this point, Councilman Lehman has decided not to seek re-election.

Lehman announced that he will not run for Council or for Mono County Assessor. He said, “For me it’s been a tough four years. I want to re-build my personal relationships and my business. This is an opportunity,” said Lehman, “for a lot of other energetic, potential candidates.”

As for his time on the Council, Lehman said he “enjoyed it a lot. I wish I could do it again, and maybe in a couple of years I will,” he said. Lehman said he is proud of his time served for the community in which he grew up.

He underscored the near-bankruptcy experience in the Town and how that crisis took a lot of time for all council members who were taken away from their families and businesses.

With two incumbents, John Eastman and Matthew Lehman, not seeking re-election, the filing deadline would be extended on March 7th, if that is the case then, through March 12th. Check with Town Clerk Jamie Gray for details.

Run for office or volunteer for the plannig commission or other city council committee if you think you can do better and see how governance, planning and budgeting really work. Then read the local media and see how your words are twisted by others, including supposedly professional journalists and editorial… Read more »

Mathew has been one of a few bright spots here in our town government and I would like to thank him for that…… SO a big THANK YOU Mathew for all that you have sacrificed for our town, you are a gentleman and a scholar!! Maybe we can find another… Read more »

Curious, it takes a real man, or woman, to sit on our council for the insulting pay and even more negative and insulting attitudes by people like you, Ken and many others on here. If you two are “real men” we should expect to see your names on the ballot.… Read more »

I think term limits are a great idea. I’ve suggested the very same over the years.

IMHO: nobody in his right mind would step onto the C.T. given the mess that’s been made of it. It sure aint my job. I warned everybody. Nobody listened.

I’m not a boat floater, thief or hypocrite enough to tell you who and / or what to think.

Look for my name on the ballot right after yours, three down and one more ” real man ”
to go.

The thought comes to mind to not let any of them leave office until the mess they made is cleaned up.

I’m not a fan of bureaucrats but I have to say I watched Lehman go into office a kid and come out a man. Lehman was installed as Mayor by Mr. Wood to fail. It was the darkest time in Mammoth’s history and Lehman rose to the occasion with grace… Read more »

Out of fairness, we must say that Mr. Wood was not on the Town Council when the airport vote went down.
Benett Kessler

Rick might not have been on Council when it all went down originally, Benett, but his poor decisions regarding the lawsuit during the years he WAS on council cost us dearly. We had plenty of opportunities to settle but his ego prevented it.

Your comment was mean-spirited, pointless and inaccurate. I go for points of accuracy and nothing more. Go find someone else to poke in the eye.
Benett Kessler

Does it takes a real man to allow millionaires to tax the commoners in order to pocket more of their hard earn dollars for absolutely nothing in return? He played his bit part in allowing Mammoth to continue being the fiefdom it is today! Two down, one or more to… Read more »

The economy is starting to turn around.
Ducks have been lined up.
Time to throw the towel in.

Okay Mr. Wood. Put your ego aside and do as Mr. Lehman. Its best for the community.