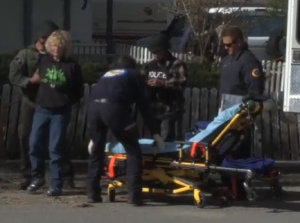 After a tense standoff, officers brought Gwynneth Brimelow out of a Mono City house.

The subject of a multi-agency law enforcement standoff Tuesday has now gone to the Mono County Jail. Gwynneth Brimelow, 48, of Lee Vining had allegedly taken a .45 pistol from a man she knew, broke into a Mono City house and refused to cooperate with law enforcement. The Mono District Attorney’s Office will file three charges against the woman.

Mono Sheriff’s Deputies, Mono Narcotics Agents, CHP and the Sheriff’s Tactical Team responded to what they believed was a potential suicide or other problem. After some time, officers did manage to bring Brimelow out of the house. Parmedics took her to Mammoth Hospital.

Undersheriff Ralph Obenberger said that Mono Mental Health would evaluate her, and if they did not find a serious mental issue the woman would be arrested. That’s what happened, and at last word Brimelow was in custody in the Mono County Jail under $50,000 bail.

Assistant DA Tim Kendall said that Brimelow would face three counts – felony grand theft of a firearm, misdemeanor vandalism and misdemeanor trespassing. Kendall said Brimelow is scheduled for bail review and pre-trial matters on May 17 and a preliminary hearing May 24.

We work to provide daily news to all of the Eastern Sierra, in the tradition of Eastern Sierra News Service and the Sierra Wave. We bring you daily happenings, local politics, crime, government dealings and fun stuff. Please contact us.
View all posts by News Staff →
Keller’s attorney files motion for a new trial
Charges still pending on Crosby case