California is unique for many reasons, but its history of one-of-a-kind, deadly earthquakes is a feature that virtually every resident has either experienced or can relate to. Indeed, “waiting for the big one” is a situation shared by virtually every Californian in every region of the state. 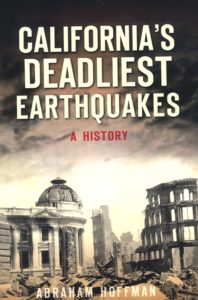 After reading “California’s Deadliest Earthquake,” a new book by noted historian Abraham Hoffman, Ph.D., it’s easy to see why the entire state is looking over its shoulder in fear of the next devastating earthquake. As documented by Hoffman, deadly earthquakes have rattled the state from the Mission era to the present day. California is home to hundreds of earthquake faults, and leads the nation every year in the number of recorded earthquakes.

Hoffman will offer a presentation about the state’s volatile earthquake history on Saturday, July 22, from 3 to 5 p.m. at the Eastern California Museum, 155 N. Grant St, in Independence. Hoffman is well-known in the Owens Valley as the author of “Vision or Villainy,” a classic history of the Owens Valley/Los Angeles water controversy. Both of his books will be available for purchase in the museum bookstore before and after his presentation.

“This book is not a technical work and makes no effort to compete with the work” of scientists studying earthquakes, Hoffman writes in the notes to “California’s Deadliest Earthquakes.” Instead of relating the stories of scientists and public officials, the book “tries to tell the stories of people who experienced the temblors … ordinary people who went through extraordinary experiences.” 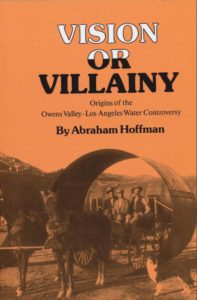 One of those rattling experiences was the Owens Valley/Lone Pine earthquake of 1872. The quake destroyed buildings in Lone Pine and Independence, and killed 25 people. The litany of deadly quakes continues apace, with the 1906 San Francisco earthquake that killed about 3,000 people, the 1933 Long Beach quake that resulted in about $50 million in damages, and the 1994 Northridge earthquake, that left damages of $550 million.

The presentation and admittance to the museum are free. For more information, call760-878-0258.

Just a friendly reminder about earthquake safety. The number one cause of injuries treated in the Northridge earthquake was from cut feet and glass. Keep your shoes next to you.