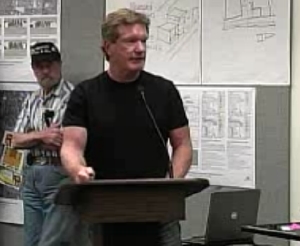 At the last Town Council meeting and in writing to employees, Mammoth Mountain CEO Rusty Gregory talked about how Mammoth and June Lake have struggled, how the financial meltdown and recession have hurt, and how the worst droughts in the region’s history have caused lost jobs and businesses. He said while he will remain CEO, a new six-member leadership team will take over operations and business duties at the Ski Area. Gregory will hold an employee meeting and introduce the new team on Wednesday.

In a memo to employees, Gregory had laid out the woes of recent years and what he says is the need for “new vision and bold action.” He called it a time to “pass the baton to a new generation of leaders who dare to have this vision and possess the audacity to take the big risk, the guts to change the old ways and the energy to do the hard work to transform the opportunities of the future into realities.”

Gregory wrote that he will remain CEO but will step away from ski area operations and other duties. The memo said he will turn his focus on “attracting and deploying the considerable resources required for the company and the community to realize its full potential.” He has been no more specific than that since issuing the memo two weeks ago.

Gregory will introduce the new team to Mammoth Mountain employees in a meeting at 3pm Wednesday. When asked if he will issue information to the public following that meeting, Gregory said he would. Mono Supervisors also confirmed that Gregory planned to introduce his new team at their meeting Tuesday around 3pm during discussion of a recreation corridor and letter to Senator Feinstein.

Open letter to Byng Hunt. Byng Hunt, I can’t believe nobody can see through the real intent of Starwood’s spokesman Rusty Gregory and the machinations they are putting MMSA through. It’s like Kabuki theater, all form and little substance. The empty promises of wealth and prosperity the new puppet management… Read more »

Ken, Just some additional information – Rusty Gregory said the Mountain would likely not do the development of a new hotel, etc. They would work with a developer. Financing is partly reliant on land ownership.
This is not a defense of anyone. Just more detail.
Benett Kessler

It’s easy to believe the web of money that would be needed will be so complex that unless you are on the board of directors of Starwood, you would never completely understand. MMSA is just another entity that is used to move money around Starwood’s business network. You can be… Read more »

who are these magical team of dream makers,headhunters or a group of scientists who can predict the future of every L.A. skiier and the economy and the weather

What facts are we waiting for? Let’s just cheer him on again. Let’s develope the base of the mountain with condos. Let’s tax our businesses (visitors) to pay for advertising for MMSA. Let’s pay for the gigantic judgement that he had “nothing” to do with. Let’s focus on enlarging the… Read more »

Life is so much more interesting with an open mind to discover what’s up. No judgments all the way around, just observation.
BK

I am posting this again with the hope that the prior posting was removed inadvertently. I’m reserving judgement and will be observing what happens to this effort. I was one of a couple of people present at the BOS meeting yesterday who is opposed to the Mammoth Base Land Exchange.… Read more »

You’re starting to sound like one of those liberals, Benett.
Are they getting to you?

Gregory is just another one of those Republicans who feels when it comes to business – anything goes.
What comes to mind is a famous line from the Godfather – “… it’s not personal it’s just business”

My guess it will be more of the same. My prediction is the new management team will have impressive backgrounds and Rusty will say how greatful MMSA is to have these people and they will all get very high salaries. Step 1) They will start transforming Mammoth again starting with… Read more »

Why not wait to hear some of the facts?
BK

O gosh, here’s Ms. Wet Rag raining on our parade. We are Americans and totally love pitching fits about the world as we imagine it to be, and then you come along with “facts” this and “facts” that, as if empirical evidence means diddly. “Facts” are so 18th century. Geez… Read more »

Facts are BAD?!!!
Reply to  Tourbillon

Pretty frightening when the presentation of facts (as they pertain to an argument, difference of opinion, choices, opposite of barefaced lying, etc.) are viewed as “antiquated” and meaningless.

I guess the only “facts” important to some in our society are found on the talk-radio programs.

Tourbillon
Reply to  Facts are BAD?!!!

Google “satire”. And thanks for the hilarity. Unintentional blunder though it was. You really are too easy, Mr. Man of Many Names.

I got it, Tourbillon.
BK

Seems to me just two winters ago we had epic snow packs in the Sierra Nevada.

There are facts that can be proven. Thats a fact. Then there are Rusty’s facts. Rusty sure can prove them to be true in his world. The rest of us have a hard time seeing his facts as being the truth or proven. Excuses and facts are not the same… Read more »

All the brave words and vision cannot undue the sever drought in the West or turn a world wide recession around. You can’t grow out of problems when there is no potential for growth. It’s not Rusty’s fault, it just the way things are and most likely will be —… Read more »

4 seasons ago Mammoth received the most ever in a season……the next year it got even more. He keeps mentioning a long tern regional drought. More deception/blame for failed policies/marketing.

Here’s one site that monitors the dourght in the West.

One local event like a lot of snow in Mammoth does not indicate regionsl trends.

If Mammoth gets a dump night after night for a wk like 3 seasons ago., People down south could care less about a ‘regional’ drought. The care about deep snow.

Rusty: If you had not made such huge EBIT promises to Starwood to justify their cash layout for the resort and to get backing for ventures like the Patina group restaurant remake, would you still have a job?