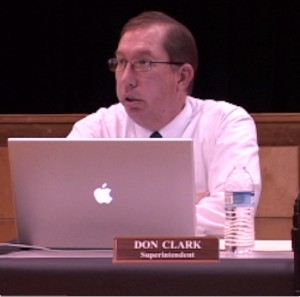 21 non-teaching positions are also set to be eliminated. While the schools have not been officially closed, Superintendent Don Clark has explained that due to the cuts, these two schools won’t have any staff. Clark explained that the students at the Eastern Sierra Academy will have a choice between Coleville High, or Lee Vining High. Its a tougher situation for the students at the High Desert Academy. Clark says that these students may have to attend schools in Bishop.

The $1.8 million budget shortfall is due to a drop in revenue along with too much spending. When asked how the district ended up spending too much, Clark explained that the district had a healthy reserve fund and had hoped to ride out tough economic times.

With what appear to be the inevitable closure of two schools, many people have been angered by the actions of the school board and the superintendent. Clark says that the attacks have become personal, and have included accusations of criminal activity.

To his critics, Clark says, I want to assure people that weve done nothing illegal or unethical, and adds, We tried to weather the storm with our reserve. I wish we would have started to make gradual cuts. Now Clark says it is time to be proactive and positive to rebuild trust in the District.

We work to provide daily news to all of the Eastern Sierra, in the tradition of Eastern Sierra News Service and the Sierra Wave. We bring you daily happenings, local politics, crime, government dealings and fun stuff. Please contact us.
View all posts by News Staff →
More Changes Ahead at Mammoth Police Department?
Personal Perspective: ESUSD Losses