By News Staff on March 4, 2012 in Government Agencies/Utilities 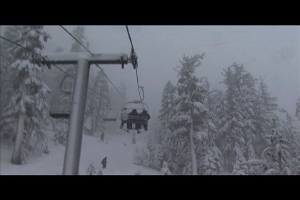 Many are still heart sick over last Wednesday’s layoff of 75 permanent employees at Mammoth Mountain.  Observers struggle to understand why a Mountain that brings in more than 100 million every year could not support its workers.  CEO Rusty Gregory has tried to explain that the money is just not there.  Most people find the realities of big business  hard to figure out.  Criticisms continue in online comments, letters and calls.  In a post on the Mammoth Mountain Forum and in a letter to laid off employees, Gregory tried to explain. He also answered some of our questions.

In regard to finances, Gregory said that the Mountain has a reserve credit line for “a significant downturn like the drought of 2006-07 and the financial meltdown of 2008-09.”  He said each of those seasons’ revenue was down by around $20 million.  This year’s nation wide drought, he said, has affected demand much more severely.  The Mountain projects a drop in revenue of $40 million.  Said Gregory, “That’s two times the drop we have seen in previous years.”

In the Mammoth Mountain Forum post, he revealed that “by March 15, we will be in breach of our loan covenants, which means that the bank will make us cut expenses aggressively. I decided to cut year round jobs. I believe that if I didn’t act yesterday that I would be causing many more job losses later this year.”

Gregory said he learned this painful lesson in the “slow response to the circumstances that led to Black Monday and the layoff of 150 employees.”  That was in 1991. Gregory repeated that this year the layoffs were his decision. He said in the Forum post that “Barry Sternlicht didn’t tell me to do this. Neither he nor any of our other partners has told me to do anything. They remain supportive, solid partners and friends.”

The post goes on to say that monthly revenue is running $10 million less than last year. The CEO said he had 5 days of meetings with his top managers to figure out which year round jobs to eliminate in order to save $500,000 per month. He said, “We did our best to cut jobs that would not directly impact the day to day operations of the mountain or guest services.”

Gregory said that management and higher paid jobs in administration, IT, accounting, and maintenance took the biggest hit. 2 VP’s were let go. He said he delivered the news personally to the 10 employees with the longest tenure with the company, from 28 to 44 years. Gregory said, “I am still crying. But my pain is nothing compared to the pain and hardship I have burdened 75 top performing, long time employees and their families with.”

Gregory’s post said that the majority of the 150 employees who were let go on Black Monday in 1991 were rehired by the company within 1 year. He said, “I hope and pray that this will be the case again.”  Others have asked how can people live in today’s economic climate until they get rehired?

In his letter to laid off workers, Gregory gives them the dreadful news that their jobs are gone without two weeks notice.  The letter says, “Simply put, the company is not bringing in enough money to pay the wages for the number of people we currently employ.”  The letter, dated February 29, said flatly, “It is with deep regret and overwhelming sadness that I inform you that your position has been eliminated and that your employment with the company will end upon receipt of this letter.”

The letter goes on to say, “Nothing I can say will change today’s harsh reality and the action I am compelled to take.  You have performed your job well and contributed significantly to the mission of Mammoth Mountain. I am so very sorry to let you go.”  Gregory also says his words will do little to lift the burden of the layoff, but he says he plans to do what he can to “lighten the load.”

The letter then goes on to say that the laid off workers are entitled to receive the insurance benefits that they and their families currently receive.  Gregory says the company will pay for up to 18 months depending on how long the employee has worked for the Mountain.  He also says the company will rehire the workers in a seasonal position if they’re interested and able.

The laid off workers, Gregory says, are leaving in good standing and will receive recommendations, help with resumes, and help with filing for unemployment benefits.  Gregory also makes himself personally available for anyone who wants to talk to him. Gregory’s Forum Post and a link to the letter to employees are both available on our website, sierrawave.net.

Others have asked why spend millions on air service subsidizes at this time.  Gregory responded that “We guarantee that each of this year’s 7 flights will break even.  Our budget for this year’s combined subsidy,” he said, “is $1.3 million.”  Gregory said at this point it’s hard to tell how much more this year’s combined guarantee will be from what’s budgeted.  He said the current estimate is $1 million to $2 million more than budget.  Gregory concluded that he thinks year round air service is fundamental to the community’s future and the Mountain will continue to guarantee the program.

Meanwhile, Gregory plans to speak to the Mammoth Town Council Wednesday night.  His item is listed on the agenda as a “Business Update”.  And, emails were circulating from a Paul Ramirez, who is apparently a second homeowner.  He has created a Facebook page called 30,000 to Save Mammoth Jobs.  He’s encouraging all to help get 30,000 visitors to Mammoth by March 31. He believes that would generate $2 million in revenue.  He also encourages businesses to go to the Facebook page and post, free of charge, any specials they have. Find his page at https://www.facebook.com/SaveMammothJobs.

oh, and i would also bring back the “spectacular night of lights” to te main lodge!!!!! with the lazer show and everything!!!!!

Clear this is all my fault.

Not buying Rusty’s line that a lack of snow affected the entire ski industry, not just Mammoth. Vail Associates, with ski areas in Tahoe, Colorado, and Wyoming, made money, just not as much as during last year’s banner year. Check out the small drops, relative to Mammoth’s, in skier visits,… Read more »

Clearly there is a lack of quality leadership from all parties. MMSA has also clearly dropped the ball as far as adapting to a down market and snow year with a very late strategy to attempt and salvage performance. The lack of action ultimately and sadly has cost many their… Read more »

I’m not excusing anything MMSA did, management wise, to mitigate their losses this season. However, I think it is important to mention that if the mountain got snow – business would be A LOT better right now and i doubt we would be having this conversation. We had a fantastic… Read more »

Maybe Vail will come to the rescue and buy Mammoth. They recently bought Heavenly, Northstar, then a few weeks ago announced Kirkwood..

That would be nice. A ski area company that know how to run a ski area.

Rusty, are you paying attention?

there is no clear solotion, obviously, but what i would do is go back to the basics, keep things as simple as possible and re build from there. keep ticket prices as reasonable as possible, not outrageous like they normally are, invest on a good marketing strategy, mammoth is not… Read more »

The Facebook page is a joke, right? Like we’re all supposed to volunteer to do our part to drive more business to Mammoth Mountain, a huge corporation that’s running itself into the ground? Maybe if the employees or the town actually OWNED the Mountain. But it’s run by a bunch… Read more »

I will volunteer to drive a ski area bus down to the OC and LA area on Fridays and Force people onto the bus with Full wallets.

I read the Facebook page and it’s not set up as a lifeline to the Mountain, it’s dedicated to getting more visitors into Mammoth to support the local economy. Restaurants, stores, etc. I think it’s a great idea.

Why would anyone “poo-poo” such an idea? Hmmm…

this is my last post. you guys just want to ass kiss one another and not come up with some real solutions. inyoindian thinks this website is a for a small circle of people to play grab ass, and will be verbal about how lame the management of this website… Read more »

That’s cool inyoindian, if you can’t bring something positive, other than sling mud at others, then I think you just need to move on .. otherwise be part of the solution.

A Facebook page with 61 likes is hardly going to help….

I would like to know what the mountain plans to do when the times get bette?. Like last year. Are they going to hire these people back or hire people at less money to increase their profits more. Never mind I already know the answer.

why does it take an every day citizen to try anything to generate business and income for the town?…….TOML and MMSA, get ti together before you go bankrupt, just like stockton, and they are not e resort town…….

It may already be too LATE.
The ski area and the town has been run by Banksters for Years.

So what’s your solution?

Banruptcy…is the only way out for the town.

As for the ski area. Mamma bear has deep pockets.

How original UTC…. how about some specifics rather than your blessing us with your on-going quips about the world going wild… How about we set term limits on Council members so we avoid two decades worth of mind-numbing and irrational/out of touch decisions (thanks Mr. Eastman) in the community’s future?… Read more »

Yeah I would like to hear your solution, too. Besides the usual rhetoric about public pensions and GGW! How about serving up some real (not teabaggery) solutions to our issues. Maybe a run on the Town Council??

upthecreek–What’s the GGW? All I can think of is Girls Gone Wild.

Rusty, as far as I’m concerned you/Barry have leveraged the mountain to the hill like a subprime borrower and now there is no room for business to go down. You have also said that you don’t want a bank to “run a ski resort” as far as I know the… Read more »

read the other articles…2 VPs were let go.. damn townies always running the lips without using the eyes.

One was a low-level “VP” who’s an ineffective and unlikable pile by reputation, and the other was very near or at retirement age…and took “early retirement.” Steve’s underlying point that over-paid top-tier do-nothing managers (some with no “seniority”) were kept, while 20+ year reasonably-paid highly-effective employees were let go, is… Read more »

He wasn’t that old, there are other VP’s that are older, and your opinion on the other is your opinion. I’m sure you didn’t know either, like most of the people flapping away. You asked how many VPs/SMG’s were let go I answered sorry if it wasn’t that one of… Read more »