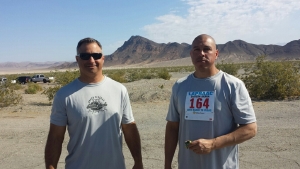 There has been a lot of recent sports activity in the Eastern Sierra involving local law enforcement officers.  The Mammoth Mountain Ski Area hosted the Fire and Police Winter Olympics for the 29th year from March 8 to March 13.  Six members of the Mammoth Lakes Police Department competed – Eric Hugelman, Marc Moscowitz, Andy Lehr, Kari Orr, Ingrid Braun, and Dick Worcester.  Between them they brought home two gold medals, eight silver medals, and one bronze medal.  Reserve Officer Mike Braun, who is the organizer of the Olympics skied for his former department, LAPD, and won one gold and two silver medals.

The 30th Annual Baker-to-Vegas relay race was held on March 23-24.  Team Eastern Sierra consisted of officers from Mammoth Lakes and Bishop Police Departments, Mono and Inyo County Sheriff’s Departments, and the Bishop Office of the California Highway Patrol.  Baker-to-Vegas is a 120 mile relay race with 20 runners per team that starts outside Baker, CA and goes through Shoshone, Pahrump, and ends up at the Las Vegas Hotel.  Each team of 20 runners requires a support team to drive a follow vehicle, “catch” the runners when they finish each leg, and shuttle runners between start locations.  Several other department employees and family members served as support team members.

Over 270  teams competed this year and Team Eastern Sierra finished 166 overall with a finishing time of just under 18 hours. Baker-to-Vegas is one of the largest athletic competitions in the World and although it’s run in the desert, the course is very challenging with three steep mountain passes.