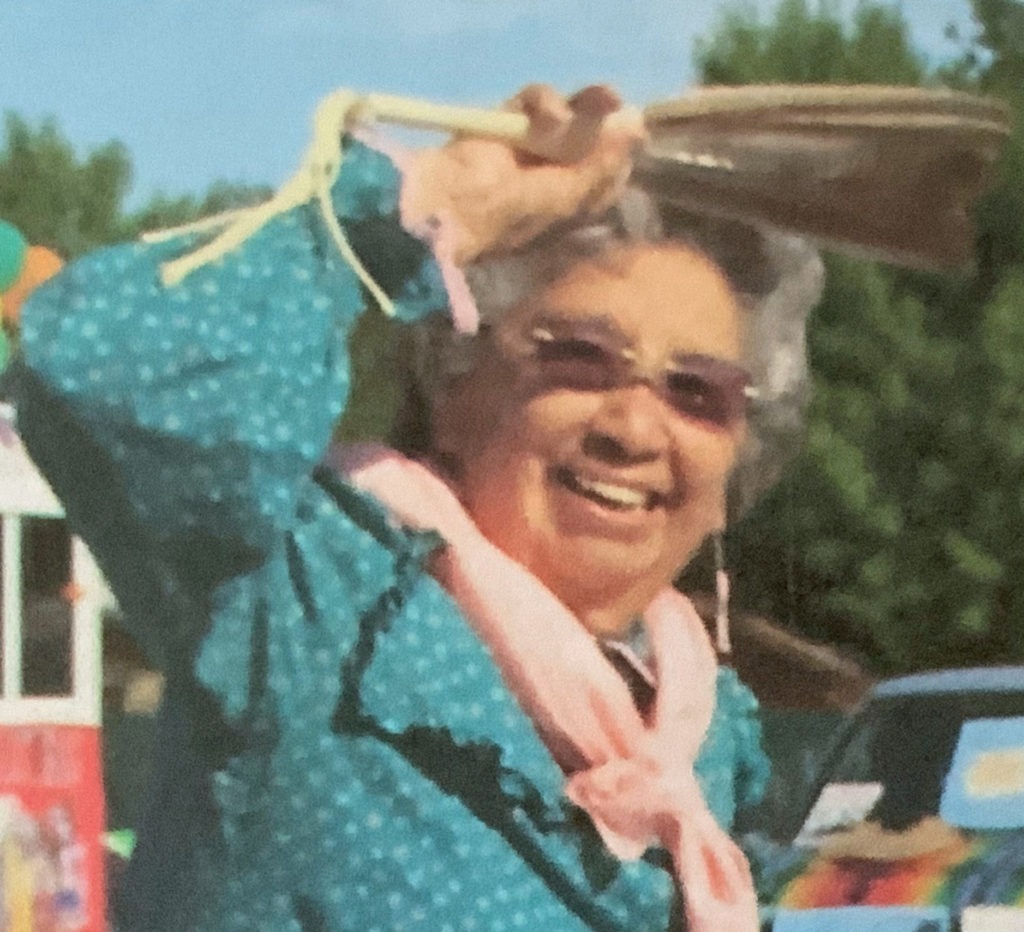 It is with great sadness that the family of Laurine “Lee” Warlie Napoles announces her passing on December 26, 2020, at the age of 92. Lee was born on November 15, 1928, on the Sunland Indian Reservation to James Warlie (Bishop Paiute) and Ida Warlie (Mono Lake Paiute). She graduated from Bishop High School, class of 1946, and later received her associate’s degree in English from El Camino College. In college, she was a champion badminton athlete.

After college, Lee joined a growing Native American workforce that had relocated to Los Angeles during the federal government’s 1952 Urban Relocation Program. Although not part of the federal program, she pursued training as a commercial seamstress and worked for a number of years in LA’s famed Garment District. She was part of the downtown LA Native American scene, establishing friendships with American Indians representing tribes from throughout the country. Lee remarked that although the government thought the Indians would assimilate in the city, they quickly began getting together at downtown establishments, even convening at the pre-Dodger Stadium Chávez Ravine to sing, drum and party. She related that Indians will always find each other and get together.

During the late 1960’s and early 1970’s when Ribbon Shirts were becoming part of powwow regalia and culture, Lee established herself as a Ribbon Shirt maker. She made custom designs for people around the LA area including for friends Iron Eyes Cody and Russell Means. She would continue sewing, selling her custom designs in Bishop at gatherings and bazaars.  She also utilized her sewing expertise on the job in the reupholstery department at Fendon’s Furniture in Bishop.

In the late 1950s, Lee met Joseph Napoles at a dance at the tribal hall on Brockman Lane in Bishop. The two would later meet again in LA and were married in 1960.

Upon her mother Ida’s death in 1972, Lee returned to Bishop where she began ongoing service to the Bishop Indian Tribe on numerous boards and committees including enrollment, housing and the constitution committee. She was a consistent proponent of Indian Civil Rights and democracy. She was especially proud of the work she accomplished as part of the first powwow committee which raised funds and brought the first intertribal events to Bishop.

Lee was a Paiute language speaker and enjoyed frequent visits from friends and acquaintances who shared conversation in their native language. She had a phenomenal, detailed recall of people and happenings throughout her lifetime. She was sought after for historical knowledge of the land exchange and other events from growing up on the Sunland Reservation. Within the Paiute community, Lee was recognized by the Bishop Paiute Tribe as a Women’s History Month Honoree in the 1990’s and was selected by the elders to be Grand Marshall of California Indian Days in 2013.

Lee traveled to Hawaii, Mexico and throughout the Southwest, where she looked up acquaintances from her time in LA. While in her 70’s, she and her sister Gebby participated in the traditional walks from Mono Lake to Yosemite. She loved to travel to Schurz, NV, to visit old friends and attend the Pinenut Festival. Her home remained the central gathering place for her family and friends. She will be remembered for her lively spirit, her independence, sense of adventure and sense of humor which she had until the end of her life. Her humor and outlook on life were expressed on her minivan license plate “SEW BEIT.”

Lee is survived by husband Joe Napoles and her children Debbie Williams, Val Goodwin, Rick and Yolonda Napoles, Mark and Andri Napoles and Ron Napoles, as well as her grandchildren James Napoles, Wade Williams and Elvis Napoles, great granddaughter Sapphire and many other members of her extended family. She was preceded in death by her five siblings James, Richard, Roger, Josephine and Geraldine, and son-in-law Larry Williams.

A private family service for Laurine “Lee” Napoles will be held, with a Celebration of Life to be announced later in the year.

State changes Tier ‘One-B’ COVID-19 vaccinations to include people 65 and older, and others…
Gene Rispaud, a.k.a. “Cowboy” of Bishop, Calif. passed away at age 87
1 Comment
Newest
Oldest Most Voted
Inline Feedbacks
View all comments

What a beautiful life lived beautifully. I am so grateful to have known her