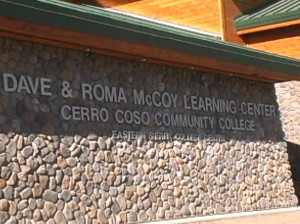 California community colleges have been among the hardest hit by the prolonged budget deadlock. The State has missed another big payment to the community college system – a system that’s been inundated with students due in large part to the recession.

In the Eastern Sierra, Cerro Coso College Director Deanna Campbell said that our college is one of three in the Kern Community College District and that the District does receive allocations from the State.

Campbell said it was predicted that the lack of a budget would impact the Kern District by $5.5 million per month. She said the college district does have a large reserve and so for now no troublesome impact is expected.

We work to provide daily news to all of the Eastern Sierra, in the tradition of Eastern Sierra News Service and the Sierra Wave. We bring you daily happenings, local politics, crime, government dealings and fun stuff. Please contact us.
View all posts by News Staff →
Flu Season Underway, Vaccines are Here
Bishop Police Launch New DUI Program