By Charles James on August 15, 2020 in General Misc. Stories 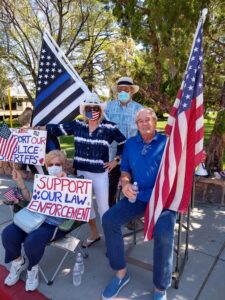 Fun conversations with a nice group of rally-goers. Typical of those that attended the rally.

On Monday’s August 10th Sierra Wave newscast, I spoke about  the Pro-police Rally held at Bishop City Park over the weekend. It was not well-known that it was going to take place, and that was intentional said rally organizers said. Everything was organized and invitations sent out by text.

Sierra Wave was “invited” around 7:00 p.m. the night before, and as it turned out, we were the only local news media invited. Things got a little delayed in posting the photos from the rally, although I did share them  with other news media colleagues unable to be there.

Our invite to the rally came from a local law enforcement official with whom we maintain a good relationship. The text-only invite limited the event to a select few.

We’ll let you in on a little secret, young people today generally don’t text! Their preferred communication is through Snapchat, Twitter, Instagram, Tic Tok and other social media platforms for mobile device users. The younger generation does not generally use Facebook…and they largely don’t text. As a result, the crowd was composed of mostly older residents, although there were a few younger rally-goers in attendance. 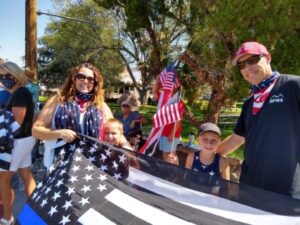 Ruth McIntosh with husband, Danny, and the twins, Jude and Eli, age 6. Never too young to learn about your First Amendment Rights!

There were about 100 plus pro-police supporters lining the street in front of Bishop City Park waving American flags, Blue Lives Matter flags, and Red Trump flags, poster signs supporting the police, and plenty of evidence that most of the protesters are taking the pandemic seriously by wearing face masks and face coverings.

It was a hot day! Kudos to those that came to the event.

It was also noisy. Not just from the rally-goers shouting out their support to passing cars, but from the bumper-to-bumper traffic on Main Street itself. Motorists were encouraged to “honk if you support the police” on signs and, boy, did they ever! There was lots of waving and “thumbs up.” That should not be surprising. The truth is, recent polls show that most people generally support their local police. And in Bishop, that is certainly true. This is exactly not a hotbed of social unrest. 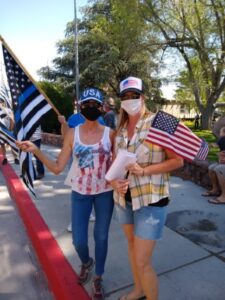 Barbara Coons and friend, Erin McMurtie have well-known last names in the area.

Some selected “Comments” from those attending the Rally: 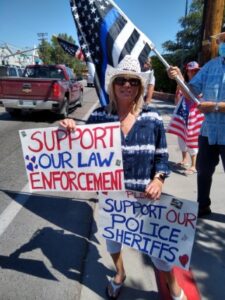 Sharon Sears, RN, was pro-actively supporting police from the curb to, well, in the middle of the street!

Sierra Wave thanks the organizers for their invitation and for keeping everyone as safe as possible during the gathering.

It was a successful outing from the standpoint that many people were able to express their support of our local police…and that no one got run over by the ridiculous amount of traffic flowing through town! 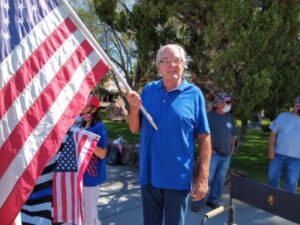 Carl Hoelshcher was with friends.

I went to work and almost died too. Nobody had a parade for me. Just saying.

Police don’t even make the top-10 most dangerous jobs. I want parades for pilots, roofers, garbage-collectors, and delivery drivers.

Funny how there was no issues from the community when this protest took place but when the BLM protest was taking place, everyone was losing their minds. There was not only rumors made up about ANTIFA coming to town (lol does anyone really think Antifa cares about Bishop?), people were… Read more »

I still think Bishop would have better law and order if we contracted with the Sheriff Dept. We’re already paying for their services thru our county taxes. We don’t need both. We are the only city in Inyo that funds both! Nothing personal involved.

Pine, I believe your comment is well-meant, but with all due respect, it reflects outdated facts regarding limited police responses being either “weapons or jail.” Those might have been the choices when my father was on patrol, many years ago, but not now, in most forward-thinking jurisdictions. I am an… Read more »

Thomas What you say there is true…..in our towns. All Law Enforcement Officers here in the Owens And Mono Counties seem to be nice and fair people doing their job well….IMO. But in other more populated areas and big cities,maybe not so much. We’ve all seen and heard of big… Read more »

Thank you for this well written response. However, one notable inaccuracy is that “weapons or jail” is the only course of action. Officers of the law, have and will continue to contact mental health when the situation warrants it. To suggest otherwise is false, and is a statement that further… Read more »

Bishop, Blue Lives Matter was coined in response to Black Lives Matter. It’s use is disingenuous deflection of the concerns of BLM. If police want to refute the claims of BLM then do so, but co-opting the name is cheap and tends to prove BLMs point. Police officers should be… Read more »

I just came to say, if you are calling to report anyone for singing and dancing to anyone else you might be the problem that needs a mental health professional.