Still at it Wednesay, the two employees of the Lyndon Larouche group in search of signatures on petitions to impeach President 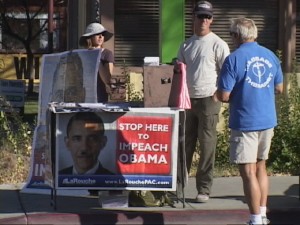 Wednesday, Alexandra Phillips, employed by Larouche, said that they want to impeach the President based on the 25th amendment. That amendment seems to deal with the succession of the presidency if the President dies or becomes disabled. The Larouche workers seem to believe President Obama is mentally unable to perform so should be impeached.

Their messages are mixed – a picture of President Obama with a Hitler moustache, concerns about economic downfall, about bailing out Wall St., about health care for all.

As one local observer said, “They seem to want to get some exposure on the coat tails of the Tea Party issues, like the Hitleresque presidential image.”

The two workers are from LA and San Francisco.

We work to provide daily news to all of the Eastern Sierra, in the tradition of Eastern Sierra News Service and the Sierra Wave. We bring you daily happenings, local politics, crime, government dealings and fun stuff. Please contact us.
View all posts by News Staff →
Honors for Mammoth Hospital
Fire Officials and Bishop City Council Will Discuss Emergency Medical Service