Two members of the Lyndon Larouche political movement made a slight stir in Bishop and Mammoth Lakes this week. 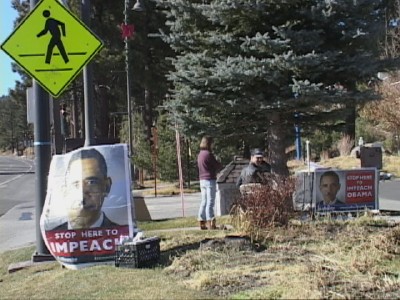 Erick Thomas of Los Angeles and Alexandra Phillips of San Francisco set up Impeach Obama posters with a Hitler moustache on the President. In Mammoth Lakes today their presence prompted calls to the Town offices and Police Department from citizens disturbed by the images.

While some were offended by the impeachment display, others signed the petitions. The two young people who set up the display called the President “self-absorbed” and said the new health-care law contains death panels. They could not point out language to that effect. They did say they are very concerned about the economy and the future of the country.

When asked to describe the impeachment process or name impeachable acts by the President, Mr. Thomas refused to answer. Initially, he refused to give his name or answer our questions. He also called the police to complain about our videotaping of his activities.

Among the morning crowd of residents in search of their mail at the post office, former Mammoth Town Councilman Kirk Stapp stopped to talk to the young man and I asked him for his views. Stapp said the man has a “first amendment right” to his view.

Stapp said he thinks the method, “these signs – Hitler – is too extreme. Impeachment is not a tool, but I do share many of his concerns about the economy. I think most people are afraid of the future, job security, their finances, life for their children. All of things weigh on people pretty heavily.”

Others said they felt the posters and the message of the pair pointed to racism. Leigh Montgomery of Mammoth said, “I think to depict the President as Hitler is about the most heinous thing an American could do. I think a lot of it is based on the fact that he is black. I listen to these on the TV, the Tea Party, they never have any proposals. They don’t have an idea in the world what to do. They just want to get rid of a black President.”

We work to provide daily news to all of the Eastern Sierra, in the tradition of Eastern Sierra News Service and the Sierra Wave. We bring you daily happenings, local politics, crime, government dealings and fun stuff. Please contact us.
View all posts by News Staff →
David Lee Presents Native American Rock Art at Cerro Coso, Mammoth
Lower Rush Creek Under Consideration for More Fishing