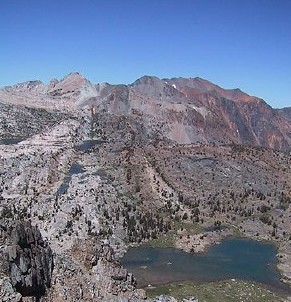 A Lake Tahoe man who traveled to the Mammoth Lakes area for a climb died in the mountains. Mono Search and Rescue team members retrieved his body. His death is under investigation.

According to Mono Sheriff’s Deputy Pete DeGeorge, last week, the rescue team was dispatched to the Saddlebag Lake area for the report of a missing climber who had not returned to camp. The team, along with a CHP helicopter, conducted a search for 60-year-old Robert Schultz of Lake Tahoe. He was camping with a group at Cascade Lake and failed to return from a day hike.

Teams searched the steep terrain around the lake by ground, air and with canine. After a number of hours, the teams found Mr. Schultz, deceased, near a steep rock wall west of the lake. Schultz was reported to have been a lead member of ski patrol from Lake Tahoe, an expert big wall climber and mountaineer who was familiar with the local area.

We work to provide daily news to all of the Eastern Sierra, in the tradition of Eastern Sierra News Service and the Sierra Wave. We bring you daily happenings, local politics, crime, government dealings and fun stuff. Please contact us.
View all posts by News Staff →
Public Meetings on State Court Building Location
Open Letter to the Staff of Northern Inyo Hospital