Monday’s meeting of the Los Angeles/Inyo County Standing Committee began with a pessimistic report on snow pillow numbers and ended in a love-fest focused on County Supervisor Linda Arcularius on the occasion of her last committee meeting. 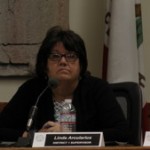 “You’ve been doing this for a long time,” Los Angeles Department of Water and Power Senior Assistant General Manager Marty Adams said to Arcularius. “And you’ve gotten good at it. The City and Inyo County are entwined over the last 100 years of history and you understand that.”  Adams described Arcularius’ litmus test for committee decisions. “An LA-centric decision will not be acceptable,” he said as he encouraged the five-term supervisor to stay involved to “keep us honest.”

Arcularius attributed sound decisions to county staff as well as other members of the committee. “When good people sit around the table they come up with good decisions,” she said. “And I will be keeping tabs on you. The outcome is just too important.”

While it’s still too early in the season for complete gloom and doom, the numbers in the department’s precipitation report were not encouraging. The snow pack at Mammoth Pass sits at 1.3-inches, 8-inches below the 50-year average. The department is planning on 55-percent of normal for the 2014-15 run-off year. With soil conditions parched from three consecutive drought years, even an average snowpack will result in a less than normal run-off. In response to the question of when the county and Los Angeles can see “normal” again, county Water Department Director Bob Harrington’s estimate was 140 to 150 percent of average, according to the state Department of Water Resources.

As a result, Aqueduct Manager Jim Yannotta anticipates exporting 60,000 acre-feet from the Eastern Sierra, roughly a fourth of that elusive normal, supplying 10-percent of the city’s water needs.

The 2014 recommendations from Ecosystem Sciences, the consultant monitoring the Lower Owens River Project, are scheduled to be available this coming Monday with a public meeting to review those recommendations scheduled in mid-January. Last year, the firm strongly recommended moderating the stipulated river flows to avoid what LADWP staffer Dave Martin described as a “catastrophic fish kill” due to poor water quality on the river. Modifications to the flows as well as the pump-back capacity would have to be agreed to by the five parties to the 1997 Memorandum of Understanding, Inyo County, LADWP, Sierra Club, Owens Valley Commission, State Department of Fish and Wildlife and the California State Lands Commission. To date, no agreement has been reached.

There has been movement, however, on other joint projects. The city and county are one step closer to developing a joint vegetation monitoring program, a result of the recent Blackrock 94 resolution. That step is an agreement over the scope of work for the contract with Ecological Society of America. According to Harrington, the contract will go to the Board of Supervisors for approval, work on the monitoring program will begin in February with the program test drive scheduled for this summer.

The Environmental Impact Report process on the Owens Lake Master Project will begin next month with the recommendations of the Advisory Group headed to the LA City Council. As for Inyo County, Harrington will recommend the Board of Supervisors support the group’s findings.

Thank you for your service Ms. Arculauris. Your experience, your credibility and communication with all of us in the Eastern Sierra and with the powers in Los Angeles will be invaluable to the Eastern Sierra even after your tenure on the Board . I for one, who has been asking… Read more »