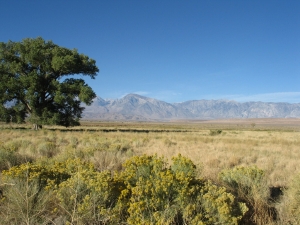 In it’s official runoff forecast, the Los Angeles Department of Water and Power figures the Owens Valley at 54% of normal and the Mono Basin at 66% of normal. Before issuance of those figures, DWP sent the Inyo Water Department a letter to say they propose a 20% reduction in groundwater pumping for irrigation needs in Laws and Independence plus a 10% reduction in irrigation in other areas of Inyo County.

The letter points to the Long Term Water Agreement which allows consideration of reductions in irrigation water for leases and for enhancement/mitigation projects in dry years.

The letter does not say if the pumped water will go down the aqueduct instead of on ranch lands and mitigation measures. That is the presumption. More information is expected at a Technical Group meeting which has not yet been scheduled.

Meanwhile, LADWP is expected to issue its annual pumping plan by the end of the week.

I guess I have to challenge the claim that it is greed. There is a city of 4 million people using that water, that is the second largest city in the US, and if you ever lived down there you would know how hard people work to make a living.… Read more »

Let LA get their water from some were else. DWP has over stept their boundaries.

A couple of times a week I drive up Rudolph Rd. near Laws, and frequently see water running down the road from a LADWP pump site issue. They work on it, but it is never repaired correctly. Go look for yourself. How dare DWP put restrictions on us when they… Read more »

MWD charges upwards of $1000 per acre foot, and adds a charge to that to store water in one of their reservoirs. San Diego has to pay MWD around $1200 per acre foot for water from the MWD aquaduct.

Here’s the link for MWD

LADWP is the largest purchaser of MWD water of the 26 members who make up the District . I think I read that LA is entitled to an allotment of 20.9% of the total available water from the MWD.

The chart is not truthful. Each member agency pays a different rate depending on distance through the system water has to flow, how much water MWD has to store for the member agencies in MWD storage reservoirs and the lenght of time the water is stored. San Diego County Water… Read more »

San Diego is engaged in litigation with the MWD regarding water costs http://www.mwdh2o.com/mwdh2o/pages/legal/litigation/index.html The website in the previous post seems to be the PR part of that campaign. The DWP website also seems to be a bit promotional. I don’t know how they’ll ever get people drinking recycled water. I… Read more »

Using recycled water like that is a non-problem. Orange County has had such a system in place for many years pumping recycled water back into the aquifer as LA proposes to do. San Diego has had water rights claims to the Colorado River as far back as the 1920’s but… Read more »

Does anyone know the current average ground water depth of the Inyo Valley?
And at what level must it be maintained to secure the healthy vegetation of the Valley?
Thanks,

Due to the impervious material it varies within the valley, around Independence it is around 40 feet below the surface, and in between 35-40 in certain areas of LP. Of course these levels will fluctuate in regards to pumping activity, recharge, precipitation, and of course snowfall and runoff. I would… Read more »

The DWP is very selective about which parts of the Longterm Water Agreement they will honor and adhere to. Our Board of Supervisiors needs to approve of any reductions proposed by DWP. If DWP had been in compliance these past years, with all the elements of the Water Agreement with… Read more »

Surely the water being pumped and taken to LA must be reduced then as well. Right? Does anyone know: What is the current level of ground water in the Inyo Valley, and is there a level agreed upon that must be maintained for the health of the valley, of us… Read more »

There is no bottom line depth at which pumping must stop. That’s what the two sides are arguing over now. The Long Term Water Agreement contained mechanisms to control pumps according to soil moisture and plant condition. Both sides admit that method failed. LA will still not accept that the… Read more »