By News Staff on June 4, 2012 in Government Agencies/Utilities 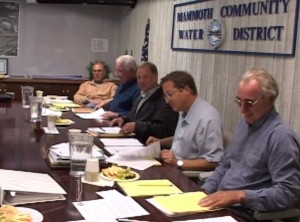 Mammoth's Water Board has tentatively scheduled a closed session discussion for June 11.

Next week, the Mammoth Community Water District board will meet in closed session to discuss the Los Angeles Department of Water and Power lawsuits that threaten Mammoth’s water rights. Meanwhile, a new out of area judge has been assigned to hear the case in Mono County, Mono’s Assemblywoman has sent out a letter opposing the suits and Water District customers have received a mailer on the lawsuits.

Water District Manager Greg Norby said that Judge Garbolino was assigned to the case and apparently DWP has not objected.  The Water District did earlier protest the assignment of Judge Roger Randall since he had also presided over the original Hot Creek lawsuit jury trial against Mammoth and over MLLA’s petition to demand payment of the $43 million lawsuit debt.

Norby said Mono’s Assemblywoman Kristin Olsen has sent a letter to her Assembly colleagues in the Los Angeles area to oppose the lawsuits and reach reasonable settlement.  Olsen wrote that DWP’s lawsuits “attack the community’s water rights going back over 60 years, and will force both agencies to spend scarce ratepayer dollars in costly and protracted litigation.”

Olsen also wrote that “LADWP is pursuing a legal strategy that is clearly designed to muscle Mammoth into capitulating to an unreasonable, unjustified, and unaffordable purchase of replacement water.”  Manager Norby had earlier said DWP wanted Mammoth Water District to buy and give to LA the same amount of water that Mammoth diverts from Mammoth Creek.  That could equal an expense of around $2 million.

Norby also said that Water District customers and property owners have received mailers urging community action to oppose the lawsuits.  The Water Board has tentatively scheduled a closed session for next Monday.

We work to provide daily news to all of the Eastern Sierra, in the tradition of Eastern Sierra News Service and the Sierra Wave. We bring you daily happenings, local politics, crime, government dealings and fun stuff. Please contact us.
View all posts by News Staff →
One time thing for skywatchers
Election Day
7 Comments
Newest
Oldest Most Voted
Inline Feedbacks
View all comments

The bottom line. The City of Los Angeles is broke! I suspect that this whole thing is more about getting the water district to pay up and less to do with the amount of water that Mammoth is diverting. This is only the start to another sordid chapter.

“The Water Board has tentatively scheduled a closed session for next Monday.”

Another closed session in Mono County!

And I don’t think her colleagues in the LA area are going to upset their apple carts either.

DWP has not objected. hmmmm .. what’s up with that.

Olsen is a Republican and the Legislature is dominated by Democrats. She has no influence and her opposition will not change a thing in this case.

so… someone that speaks the truth and cares about Mammoth, but is a Republican, will have no influence……and because the Legislature is dominated by Democrats Mammoth Lakes will be fed to the LADWP…..so we should blame our water problems with LADWP on the Democrats?! If this is true and Olsen… Read more »