– Press release from the Los Angeles Department of Water and Power

LOS ANGELES – The Los Angeles Department of Water and Power (LADWP) Tuesday reported its latest water conservation metrics showing that its customers used 20.9% less water in December than they did in the previous year; residential water use was down to 61.5 gallons per day in December compared to 77.1 gallons in November. 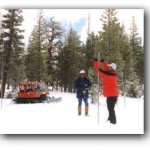 These numbers, provided to the State Water Resources Control Board, report a timely and favorable response to the statewide drought with the announcement of LADWP’s recent snow survey in the Eastern Sierras continuing to track the driest year on record.

The Mammoth Pass snowpack water content is 21 percent of normal to date, with 5.9 inches of water on the ground in the form of snow. The data on six remote snow sensors in the Eastern Sierra help forecast the amount of runoff that will flow into the Los Angeles Aqueduct.

LADWP’s snow survey follows the Department of Water Resources’ (DWR) announcement of the dismal results of its snow survey for Echo summit last week. DWR reported the snowpack to be only 12% of normal at the location, and 25% statewide.

“I want to thank Angelenos for responding to our call to conserve water,” said Mayor Eric Garcetti. “It’s  critical that we keep conserving as we enter what is shaping up to be a fourth year of serious drought.”

Marty Adams, Senior Assistant General Manager of the LADWP Water System said, “With the dire conditions in the Eastern Sierras, we are grateful for LADWP customers’ sustained commitment to water conservation. While we did get some relief from a couple of storms in December, the 20.9% reduction in water use means our customers continue to respond to the drought, shutting off their sprinklers in anticipation of the rains to reduce outdoor water use. We can tell that conservation remains at the forefront of people’s minds, and they have made lifestyle changes to help meet Mayor Eric Garcetti’s call to reduce our per capita water use by 20% by 2017.”

Under the City’s Water Conservation Ordinance, outdoor watering with sprinklers is currently limited to three days a week, which in most instances for residential customers, can be completely shutoff during the cooler fall-winter season.  Customers are urged to re-set sprinkler times, double-check for leaks indoors and outdoors, and consider replacing their water-thirsty lawn during this dormant growing season. Customers can take advantage of the Cash In Your Lawn Program, which rebates up to $3.75 for every square foot of turf removed in favor of California-friendly plants or permeable hardscape.

To verify the remote sensor readings, each year on February 1, March 1 and April 1, LADWP snow surveyors journey into the backcountry via snowcats and on snowshoes and skis to measure each location by hand. When snow first falls, 10 inches of powder is roughly equivalent to one inch of water content. However, as the snowpack settles over time, approximately three or four inches of snowpack equates to one inch of water content. Snowpack records at many of the locations go back almost a century, and the LADWP uses the average of the last 50 years to predict water runoff and deliveries to the City.

People are thinking in months right now: “maybe March will be wetter”. The mindsets may have to change to years: 2014 was dry — let;s hope 2015 and 2016 are wetter. There have been 100 year droughts in the SouthWest. It would be prudent to prepare for it by building… Read more »

Desal is probably the least desirable method. Water from desal plants costs upwards of $2000 per acre foot. In addition to the high cost, you need huge amounts of electricity to run such a plant. The region does not have the necessary generation capacity to support large scale desal, and… Read more »

DT: Yes, recycled “gray water” is great — as long as you got the water to flush your poop. That initial poop flush has to come from somewhere.

Ken, I am not talking about gray water. With this system, municipal sewage is treated to a pure, drinkable standard and pumped back into the aquifer where it mixes with natural groundwater. Groundwater later pumped back to the surface, treated like any other groundwater, and put into the municipal water… Read more »