Less than 24 hours before the Inyo County Board of Supervisors “Talking Water Workshop” Tuesday, ranchers were sent an e-mail from the Los Angeles Department of Water and Power advising them their irrigation water would be curtailed Friday, May 1, just one month into the six-month irrigation season. 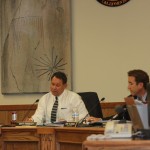 The workshop was requested to find a solution to drastically reduced irrigation water available for valley agriculture by negotiating down mandated allotments. LADWP’s Annual Owens Valley Operations Plan indicated irrigation would be reduced from a typical 49,000 acre-feet to 16,500 for the 2015-16 run-off year. The letter cut that number for some farming operations to zero as of Friday.

Prior to the workshop, the Board reacted quickly with a letter to Board of Water and Power Commissioners President Mel Levine and LADWP General Manager Marcie Edwards pointing out “clear violations” of the Long Term Water Agreement. 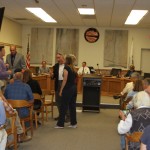 Some farms were exempt from the cut-off: wet leases in the Bishop Cone, thanks to the Hillside Decree requiring LADWP to use on the Cone water quantities equal to that extracted from the Cone. Agriculture designated as Enhancement Mitigation projects were also exempt.

Any sympathy LADWP could have had as an equal sharer in the pain – the plan also called for no water exports to the city until mid-fall – was erased by the letter and its timing.

But, there is hope.

Great Basin Unified Air Pollution Control District Officer Phillip Kiddoo told the Supervisors there could be water savings on the Owens Lake in time to supplement irrigation allotments. “We can look at drying down early,” he said. LADWP is required by law to reduce dust on the lake; Kiddoo pointed out that his district is required to slap the department with a $10,000 a day fine if they don’t.

Los Angeles and Great Basin signed an agreement that would both meet the dust mitigation requirements and require half the water currently being used in shallow flooding. But full implementation of the agreement will take time.

Around the fourth hour of the five-and-a-half hour meeting, Former District 1 Supervisor Linda Arcularius suggested the County send a letter to the State Lands Commission, the official owner of the lake and the only stakeholder not represented at the session, asking for an authorization to allow LADWP and Great Basin to work together to reduce water in the face of the severe drought conditions.

Board Chairman Matt Kingsley directed staff to write the letter, requesting a potential 20,000 to 25,000 acre-feet savings. He also directed staff to encourage the Memorandum of Understanding partners to meet and discuss options for water savings on the Lower Owens River Project, estimated to use  15,300 acre-feet, up from 14,300 last year.

The savings on the Lower Owens could come in the form of reduced base flow from the mandated 40 cubic feet per second, though LADWP staffer Eric Tillemans estimated that the savings could only be 1,000 acre-feet.

Early in the meeting, Yannotta was cautioned by LADWP attorney to not discuss the letter. By the end of the meeting, Yannotta did confirm that “if there is relief (from water obligations) in May, we can continue irrigation.” Yannotta added that over the next two days, he would talk to his staff and the process could move forward.

A packed crowd of ranchers and mitigation project advocates came armed with numbers. “I’m not convinced the water isn’t there,” said Sally Manning pointing out a discrepancy between the anticipated 276,000 acre-feet of run off and the 124,400 (plus 41,000 acre-feet slated for export starting in November). Yannotta explained the balance, roughly 110,000 acre-feet, would be used on private lands or lost to aquifer recharge and evaporation/transpiration (conveyance losses).

Mike Prather expressed his concern for wildlife values on the Owens Lake. Andrew Warren told the Board “LA is using this drought to pull water off the lake.” Earl Wilson posed the analogy that “if we controlled power sources to Los Angeles and we told them we were cutting off power to their manufacturing base – that they can keep tourists and home owners. What do you think they’d say?”

Cattleman Scott Kemp suggested 20-percent cuts to the LORP and Owens Lake and a 30-percent cut for irrigation. “We know everybody’s taking a cut,” said rancher Gary Giacomini, “we just want it to be equitable. We’re all neighbors.”

Zack Smith, with 1,500 acres of alfalfa fields and native meadow between Big Pine and Independence and Shepherd Creek, said “we’re not asking for more than our share. We don’t export our hay to China (a dig on Central Valley water-hungry pistachio and almond farmers). Our hay is sold locally. Our only export is to a California dairy.” Smith pointed out the advantage of green areas agriculture provides in the valley. Without irrigation water, “the dust will continue to flow,” he said, “not from the lake but from dried up fields…. A week after May 1, our crop will be dead and we’ll get nothing next year.”

Inyo/Mono County Agriculture Commissioner Nate Reade put it all in perspective with a diagram showing the economic impact of reductions in irrigation: the $19.8 million dollars in ag production dependent on irrigation in Owens Valley could realize a $13 million loss in one year. In addition, Reade’s calculations indicated a loss of 100 jobs directly related to agriculture and a loss of 14,500 acres of irrigated land with an unknown cost to wildlife habitat, watershed health, fire danger and dust emissions.

The meeting heated up as the hours ticked off. Supervisor Mark Tillemans asked what happened to the early runoff from an unseasonally warm winter.

“The runoff went to Haiwee reservoir prior to April 1,” Yannotta answered. Supervisor Jeff Griffiths asked why LADWP didn’t ask for an early ramp down on the Owens Lake. “We didn’t know it would be this bad,” Yannotta said, explaining that the May 1 irrigation cut-off date was put into play when the department realized it may not be able to meet its mandated water obligations through the summer.

“You’re pitting one group against another,” Griffiths said. “We can’t destroy ag in this county.”