The Los Angeles Department of Water and Power is suing Inyo County for violating the California Environmental Quality Act by attempting to “obtain property and water rights owned” by Los Angeles at three county land-fills without conducting “the necessary environmental review.” 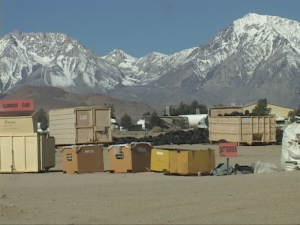 According to the press release sent to Sierra Wave Friday, the suit was filed February 9.

Inyo County Counsel, Marshall Rudolph, was unaware of the suit when contacted Friday afternoon. Unable to comment on on-going litigation, Rudolph did confirm the County had filed for condemnation Wednesday, February 14. He also said the department had yet to conduct an appraisal to counter Inyo’s $522,000 for the landfill sites in Bishop, Independence and Lone Pine.

LADWP GM David Wright’s statement identifies the department’s reason for the suit: “The period of time under California law to formally object to Inyo’s action was expiring and the County had refused to extend the legal deadline.”

The statement calls Inyo’s move to condemn the sites “unnecessary, disappointing and we believe violates CEQA and the Long Term Water Agreement.”

What’s confusing is LADWP’s suit was either filed five days before the County filed for condemnation—or the press release got the date wrong.

In mid-August, Richard Harasick, DWP’s assistant general manager of water systems, attended Inyo’s Board of Supervisors meeting with a resolution to regarding eminent domain proceedings. Harasick offered to negotiate a sale price that would be fair to Inyo—but without water rights. He also urged the County to not proceed with the eminent domain process.

Inyo did proceed, explaining the resolution did not initiate litigation; it simply authorized it.

The County’s inclusion of water rights in the condemnation may be the biggest sticking point. The department has maintained the City Charter won’t allow any transfer or sale of its water rights. At a Tech Group meeting in late January, Jim Yannotta, DWP aqueduct manager, offered to make water to the landfills an enhancement/mitigation project.

Faced with no other choice due to Inyo County’s refusal to extend a legal deadline, LADWP filed a lawsuit on Friday, February 9th, alleging that Inyo County violated the California Environmental Quality Act (CEQA) by taking actions to attempt to obtain property and water rights owned by the City of Los Angeles at three County-operated landfills without first conducting the necessary environmental review. LADWP filed its lawsuit because the period of time under California law to formally object to Inyo’s action was expiring and the County had refused to extend the legal deadline by mutual agreement, a process called “tolling”. LADWP’s legal action was known in advance by Inyo County and understood by both parties as necessary to preserve the City’s rights, should the parties fail to reach a resolution through negotiations that have taken place over several months.

In August, 2017, Los Angeles had asked Inyo County to delay condemnation proceedings for the three properties in the Owens River watershed owned by LADWP and operated by the County as landfills, in order to properly negotiate a land sale. LADWP offered to continue providing water to Inyo County to operate the landfills, while retaining the City of Los Angeles’ water rights associated with the land. Under these terms, Inyo County could continue to operate the landfills, and LADWP would be able to ensure proper protection of local groundwater and the watershed.

On Wednesday February 14, the Inyo County Board of Supervisors initiated legal proceedings to condemn the properties despite Los Angeles’ willingness to sell the land to the County at a fair market price and provide a permanent source of water sufficient in sufficient quantity to operate the landfills. This action is unnecessary, disappointing, and we believe violates CEQA and the Long Term Water Agreement, which both Inyo County and LADWP agreed to abide by.

As the landowner, LADWP has had concerns regarding the management of the landfills, which are unlined, fail to meet current regulatory standards, and can negatively impact the watershed. Since 1993, regulators have cited Inyo County for over 2,500 violations for its poor landfill operations. Inyo County’s violations have included serious violations related to groundwater contamination and explosive gas, as well as violations relating to its failure to comply with its permits and litter blowing onto adjacent land.  To help address these issues, lease terms for the landfill were written to protect the land and the watershed. Though Inyo County agreed to those terms, it now seeks to take control of the properties through condemnation and without proper environmental review and oversight.

LADWP maintains that the landfills must be operated with the appropriate measures to protect the land and the safety of the watershed. We will continue to protect the water and City’s water rights regardless of the ownership of the land. As such, we intend to contest Inyo’s County’s hostile taking of the property to ensure proper appraisal of the land, and safeguard environmental and water protections through appropriate environmental review.

As a long term solution, LADWP continues to urge Inyo County to consider the mutually beneficial solution of building a modern landfill that meets all current standards outside of the Owens River watershed. This will ensure that Inyo County has a well-operated waste disposal site, while continuing to safeguard public health, safety, and the environment.

Stick to your guns Inyo Co. LADWP is trying to bully locals again. They own so much land in the OV, Inyo County needs some for normal business operations to support the small communities that we have here.