For decades, the Los Angeles Department of Water and Power refused to cut a deal for a long-term lease at Bishop Airport 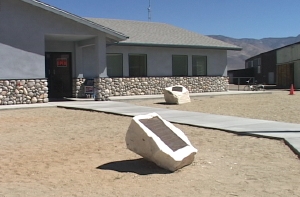 which stymied plans for an industrial park and undercut Federal Aviation Funding for improvements. Finally, the current DWP administration has said yes to an easement at what is now called Eastern Sierra Regional Airport in Bishop.

Inyo County Administrator Kevin Carunchio said the significance of this airport-wide easement is that FAA funding can now go through and development for aviation can move ahead. The FAA requires a long-term arrangement at airports before granting funds. Previously, Inyo County functioned with 20-year leases at the airport, but the FAA would not give grants if the lease were under that term.

Carunchio said the easement is given in perpetuity for airport-related purposes. New DWP General Manager Ron Nichols will take advantage of positive news. He will fly to Bishop Airport Monday for a ceremony to commemorate the easement agreement at 9:30 am at the Main Terminal building. Inyo County calls it “an historic occasion.”

Any agreement the LADWP makes with Inyo seems historic since it is so rare. Over the years as Inyo tried to negotiate a long-term lease or some other agreement to open the door to airport development, DWP officials used it as a bargaining chip to try to get more water. There is no stated quid pro quo on this current easement deal.

The current easement agreement includes approximately 609 acres of the airport. The easement document was approved by the Los Angeles City Council last June. The purpose of the easements is described as operation and maintenance of the airport and for planning and development of improvement projects that are eligible for funding through the FAA’s Airport Improvement Program.