DWP commissioners have approved a plan to build a 50 megawatt solar demonstration project on the Owens Lake bed. 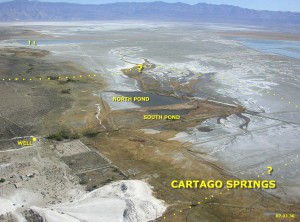 An LA Times article reports that the ambitious plan was approved by the LADWP board of commissioners on Tuesday. While Los Angeles bought vast tracts of land in the Owens Valley for the water rights, the city does not actually own the majority of the Owens Lake bed so the next step is to take the plan to the California State Lands Commission since the state owns the actual lake bed. DWP plans to ask for a categorical exemption from the California Environmental Quality Act review.

Citing the recent invitation only meetings with Interim DWP Manager David Freeman, the Times article states, City officials have taken special care to sell the idea to Owens Valley residents. In fact, Freeman never mentioned the ambitious project to those who attended private meetings, including the director of the Air Pollution Control District.

The proposal right now includes a 50 megawatt solar demonstration project on 616 acres of lakebed, but the Times reports that the project could expand to thousands of acres in the future.

The solar plan would be used in part to kill two birds with one stone. The department is already involved in major dust control efforts on the dry lake that currently uses about 90,000 acre feet of water a year to flood dusty areas. The times reports that DWP estimates that the solar project could save 2,460 acre feet of water per year, by using the solar arrays to keep the dust down.

The Times quotes Inyo County Administrator Kevin Carunchio as saying, Generally, the county has been looking at the potential for renewable energy projects to generate economic activity and fill the county coffers.

According to the Times, Mike Prather with the Eastern Sierra Audubon Society also showed general support for the plan saying, This small test project is in an area of the lake that has some of the least value for wildlife. It’s a good area to put a project, to see if you can make it work and fix the dust.”

What happens next is up to the State Lands Commission. Whether the State approves of the project without the environmental review is yet to be seen.

Staff from the Department of Water and Power is expected to attend the Inyo Supervisors meeting Tuesday to give an informational presentation to the public and the board.

We work to provide daily news to all of the Eastern Sierra, in the tradition of Eastern Sierra News Service and the Sierra Wave. We bring you daily happenings, local politics, crime, government dealings and fun stuff. Please contact us.
View all posts by News Staff →
CA Chips in $20 Million Toward Digital 395 Project
Murder Suspect to be Tried as Adult