By News Staff on October 7, 2013 in Government Agencies/Utilities 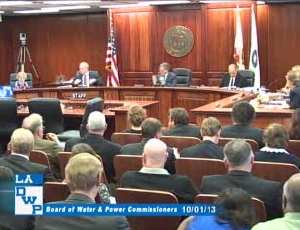 Los Angeles news reports revealed recently that the Los Angeles Department of Water and Power has transferred more than $40 million of ratepayer money to two private trust funds over the past 13 years but has failed to make detailed financial records available. The new DWP Commissioners recently made it clear that they want the facts and more transparency.

Two tax-exempt trusts were formed by DWP and its employees’ union more than 10 years ago. The Joint Training Institute and the Joint Safety Institute spend more than $3 million every year, but it’s not clear on what. DWP management and labor representatives sit on the board of these trusts. Officials said the organizations have carried out safety training which has reduced DWP on-the-job injuries significantly.

At the October 1st Commission meeting, new President Mel Levine put it to DWP General Manager Ron Nichols that he wants to see expenditures linked with activities and results from the two trusts. Nichols sits on the Trust Board. Levine said that an article in the Los Angeles Times “suggested many millions of dollars could not be tracked – where it went and how it was spent.”  Levine wanted to know why all of this is not transparent. 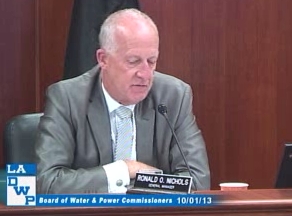 Nichols said the trusts are part of the employee MOU and were voted in by the City Council. Release of financial information, he said, requires a vote of the Trust Board. That Board was scheduled to meet Tuesday. Levine suggested that the Trust Board come up with a “detailed accounting of how more than $40 million was spent since the year 2000.” He said the City Controller is concerned with the “lack of specificity and documents.”

Levine quoted from the tax returns of the two trusts. In five or so broad categories, the two trusts spent a total of nearly $3 million last year. The categories are administrative reimbursement, travel, training workshops and other. Commission President Levine said, “That’s close to $3 million with almost no detail at all. In light of the fact that it’s ratepayers’ money, we are entitled to know how it was spent.”

Four new LADWP Commissioners, appointed by Mayor Eric Garcetti, will clearly push aggressively for the facts. Mayor Garcetti was also recently quoted as saying he will fight for the information to go public. A news report from KFI radio in LA says the Public Integrity Division of the LA County District Attorney’s Office has “taken an interest” in recent reports that trust managers have not detailed how the more than $40 million has been spent.

My dad worked for the City of LA Burea of Engineers for a good long time, and they referred to DWP as Department of Water and Parasites. There is no love for DWP in other city departments.

Elected officials are supposed to attend mandatory Brown Act training. It would be interesting to see if they are.

A triple Amen to that Benett!
I say put Brown Act billboards all along 395!
Mongo

A double Amen to that Benett! The only person(s) who would object to open public meetings would be the elected officials themselves who have everything to gain by keeping their constituents in the dark doing who knows what in secrecy. I say post a copy of The Brown Act in… Read more »

Amen to that Benett!

There are some that are currently in office that got there because their predecessor bailed because he didnt want to be transparent. He is fighting transparency also,,, but it is coming!

Violations of The Brown Act are so commonplace today, that most of we constituents have taken the point of view that the violations are business as usual.

Good point. It’s a mindset that elected officials need – keeping uppermost in their minds that whatever they are dealing with should be handled in open session. Their lawyers will tell them when it has to go behind closed doors.
Benett Kessler

Elected officials love to talk about what’s good for their constituents, etc., but in reality if the opportunity to make a buck or throw some money towards their pals or relatives pops up … Voila! … secret meetings.

A number of elected officials seem to lack the understanding of of what open government is.
BK

What's the Brown Act have to do with this story?
Reply to  Benett Kessler

Could give you some hints, but maybe you should do some investigative reporting on this one.

Benett Kessler
Reply to  What's the Brown Act have to do with this story?

Some reports in LA do say that this Trust Board should have been holding open public meetings while sharing their expenditures.
BK

It seems that to them, open government = open check book when it’s beneficial to their cause or pocket. LADWP serves a great purpose but the costs of running it have spiraled out of control. Employees are able to take company vehicles home on a daily basis with rate payers… Read more »

SierraFan, Nichols, on the job 3 years, eliminated executive take home vehicles in 2011 along with other decisive measures. Cut hundreds of millions from budget. May be first manager in years able to run DWP and that didn’t get job as political payoff. He froze nonessential hiring, but was pressured… Read more »

Looks like DWP is getting caught with their hand in the candy jar.

Water Moccasin
Reply to  That is wonderful

LA Weekly reported on this in 2005 with some substance. LA Times makes two phone calls, talks to one person, and then runs tabloid headline in 2013. Garcetti, who sat on City Council from 2001 to 2012 claims he heard nothing of it before, but now that he is mayor… Read more »