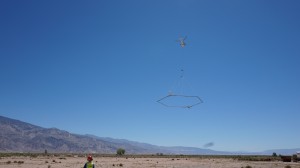 Bishop, CA – Los Angeles Department of Water and Power (LADWP) hydrologists are utilizing Airborne Electromagnetic Surveying in a pilot study Saturday, July 25, Sunday, July 26 and Monday, July 27 at Owens Lake near Highway 395 to better understand the groundwater basin beneath the lakebed and protect habitat on the surface during the implementation of the Master Project.

The Airborne Electromagnetic Survey consists of state-of-the-art measuring equipment, resembling a webbed oval dangling 100 feet below a helicopter, sending radio signals into the ground then measuring the returned signal to determine the geological materials. The practice is completely nonintrusive to the landscape and provides scientists with a clearer picture than previously-used underground mapping methods. Traditional underground mapping consists of drilling a series of test holes – up to 1,500 feet deep and up to several  miles apart – across the desired area’s surface, taking samples from deep inside the holes and testing them for a “best guess” look at what lies beneath the surface.

“The data gathered from this pilot study will be useful as we work to better model the Owens Lake groundwater as part of the Master Project,” Eastern Sierra Hydrologist and Project Manager Saeed Jorat, Ph.D. said. “By protecting the landscape while gathering this data, we ensure the safety of the habitat and the species residing there in a cost effective manner.”

Data gathered from the study will be used by LADWP to map the location of bedrock, fault lines and groundwater depth. This information will assist the Department as it works to model the Owens Lake Master Project and protect resources that utilize groundwater in the area – private wells, vegetation and habitat – while also preventing potential land subsidence.

If the pilot study goes well, LADWP will utilize the new technique for future projects in the Eastern Sierra region.

Native American Helicopters LLC (NAH) will be conducting the flights using an Astar 350FX2 helicopter. The helicopter will fly parallel to Highway 395 over the North East corner of Owens Lake for a three day period from approximately 8 a.m. to 4 p.m. The equipment will be approximately 100 feet above the surface while in flight. During that time, the helicopter will not fly over the Highway, power lines and other structures so as to protect the safety of all involved during the operation.

High Water….After thinking about it,maybe I’m the one that needs the vacation….sorry for the out-of-line post…..really.

Low- This is only being used for peaceful purposes, the helicopter is A Native American Helicopters LLC (NAH) will be conducting the flights using an Astar 350FX2. See even the helicopter has a very peaceful, respectful name. no flying over power poles, or highway 395, safety is job #1 flight… Read more »

Slow-inyo- very nice post. It does my heart good to know that what I say means so much to you. I should go away and play with the bears. I Don’t watch TV so I don’t know of said show. But it sounds like a very intelligent way to spend… Read more »

High Water ;…Have you ever watched that television show on ,I think,History channel called “Alone” ?..about dropping off people on Vancouver Island by themselves….no one around,not even a film crew….just “alone” to fend for themselves.When I watch that show,I think it might be kinda neet…..for a while…without the regular obsticles… Read more »

And where is the Great County of Inyo? Those fine leaders, whom we pay to do….what? Well, at least we can watch those weekly meetings now, where they can discuss groundwater, and then have lunch! Friends were being fleeced! What you see happening in this country right now, where a… Read more »

Yes (Philip) DWP needs to use this technology to map the whole Owens Valley to validate the amount of or lack of groundwater. Yes a third party needs to assess the data to see if the groundwater mining DWP says it is not doing is truthful. This might help our… Read more »

Where’s our county supervisors , county legal beagles, superior court judges and grand jury when you need them the most?
Grandpa always said sometimes you have to fight back!

Not knowing a lick about airborne magnetic survey and attempting to wade through websites like this one http://www.dmec.ca/ex07-dvd/E07/pdfs/65.pdf the thought occurs that the data from this survey needs to be assessed by third party examination of the study . Hopefully DWP will provide that data to the Inyo County Water… Read more »

I agree with Steve this nothing more than a ploy to find where the water is plentiful, and can suck more water out of Owens Valley, and ship down South without any immediate negative results that will show. Screw me one that is your fault, screw me twice my fault.… Read more »

So they have sucked it dry on the surface, now DWP is looking for more water to pump form under the ground. In 1908 LADWP was granted the head waters of the Owens river. They are violating the intent of that agreement by pumping any ground water in the Owens… Read more »