Sixteen years ago, the State Water Resources Control Board ruled that the Los Angeles Department of Water and Power 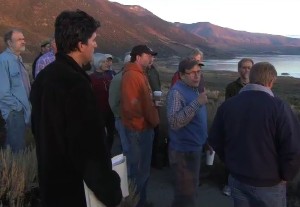 must reduce water diversions from the Mono Basin and restore streams that feed the famous body of water. Every couple of years the State Board checks on progress. They came to Lee Vining last week and the outcome produced a plan between DWP and the Mono Lake Committee that the two sides would use a facilitator to reach agreement on stream work.

State officials joined staff from DWP, the Mono Lake Committee and other interested parties at the edge of the lake for a field trip early in the morning. The tone of the exchange was reportedly harmonious with open discussion of how work has proceeded on the streams that had previously been virtually dried up.

Scientific reports examined the basin and DWP had issued a response. LA officials were concerned about the prospect of rebuilding aqueduct facilities for stream restoration work.

Jonah Matthewson spoke with DWP Water Chief Martin Adams. Adams pointed to the work DWP has done to restore the basin and the fact that the two sides will work together to come up with a mutual plan for more work.

Geoff McQuilkin, Executive Director of the Mono Lake Committee also said that there would be mutual goals developed with help from a facilitator.

Frances Spviy-Weber, once the director of the Mono Lake Committee, is now the Vice Chair of the State Water Board. She commented on the plan for DWP and environmentalists to work together and her perception that a level of trust has been established.

Now, the two sides, tough adversaries for at least three decades, will sit down at the negotiating table and work out mutual plans to revive the Mono Basin environment while delivering water to LA.

We work to provide daily news to all of the Eastern Sierra, in the tradition of Eastern Sierra News Service and the Sierra Wave. We bring you daily happenings, local politics, crime, government dealings and fun stuff. Please contact us.
View all posts by News Staff →
Almaguer Appears in Mammoth Court Via Video Conferencing
Motion to Disqualify Leplat’s Attorney Scheduled for Hearing