By News Staff on February 6, 2013 in Government Agencies/Utilities 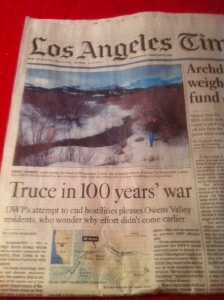 As local environmental groups stew over what some call the Department of Water and Power’s manipulative negotiations on the Owens Dry Lake and Inyo County still can’t get LA to admit that groundwater levels relate to environmental damage, the Los Angeles Times reported Wednesday that LA, in search of peace, has resolved three other disputes – rights to Mammoth Creek water, Rush Creek water, and water for the community of 40 acres at Pine Creek.

The story says that Mammoth Community Water District will compromise with LADWP on LA’s legal attacks on Mammoth Creek water rights. The Times story says, “In return for less than $5 million, Los Angeles would drop its lawsuit and both sides would agree to never challenge each other’s water rights.”

The story says DWP would use the money for “water-saving improvements designed to increase the flow of water in the aqueduct.” So add $5 million to the Water District’s $600,000 in legal bills and the community of Mammoth ends up with more millions to pay.

In the Mono Basin, the Times says, LADWP will build a $12 million adjustable gate to help water flow down Rush Creek. In Pine Creek and the community of 40 acres, DWP has finally agreed to give the area the water it needs and more in emergencies.

The LA Times story brings up the possibility that DWP wants a shinier image as the centennial of the aqueduct approaches this November and with it lots of media attention. Asked if this were their motivation for resolution of issues in Mammoth, the Mono Basin and 40 acres, DWP General Manager Ron Nichols is quoted as saying, “It’s serendipity. The important thing is to show that the DWP will work with reasonable people to find solutions that work for both sides.”

Maybe in small situations, but so far the enormous water issues in the Owens Valley and Owens Dry Lake remain pinned under LA’s heel.

What happened in the early 1900’s has happened and we can do nothing about it so get over how, why and for what reason Los Angeles got the land and large water rights to the Owens Valley. What we need to be fighting about is the Long Term Water Agreement… Read more »

Hey Cheese breath, you have absolutely no idea what you are talking about…read ‘ Water Wars’ you need some education, no a lot of education….the Owens valley was a pretty lush farming area until the DWP wells sucked it dry. Where do you think all the water went when the… Read more »

I stand by what I said in regard to the depression. I am not defending them, but merely pointing out the fact that people didn’t sell out because there was no water here, we all know there was plenty. A comment was made that the high desert couldn’t support the… Read more »

Big Al, your ideas about the great depression sound plausible, but they’re inaccurate, at least as regards farm prices. They didn’t begin seriously declining in the US until a few months into 1930. http://en.wikipedia.org/wiki/File:US_Farm_Prices_(1928-1935).JPG Just what led to the great depression (multiple causes) and when they started will be probably… Read more »

Hey Chip, You might want to check your own facts and educate yourself before you claim somebody is uneducated. Your “cents on the dollar” statement is completely false. In fact, it’s the opposite. In most instances, LA paid extremely high prices for the land they bought in the OV, way… Read more »

Perhaps LADWP figured the citizens of the Owens Valley would just roll over and hand over our water rights. Fishy. Let’s not trust them.
In the words of Mr. Myagi from “The Karate Kid…”Danielson, EYES…ALWAYS LOOK EYES”.

One hundred years ago that is exactly what the residents of the Owens Valley did. Don’t kid yourself, the farmers who sold their land did so because they could not make a living farming and ranching in the harsh environment of the Owens Valley. It is high desert, not this… Read more »

Dear Cheese, Apparently you have not viewed photos of the turn of the century here, spoken to old-timers or read accounts of what happened. Before making snappy remarks, why not look into it a bit. Read a little book by the Parchers called “Dry Ditches” for starters. Then check out… Read more »

Cheese- so you think it is o.k. for people to come up here and buy land and water rights under false pretenses? That’s actually what DWP and the City of Los Angeles did! Please reply.

That’s not even close to the truth. The locals sold because they thought they were selling to a Federal Water Reclamation Development. A water management system that would provide year around water. They were sold this lie by agents of the LADWP. The Fed’s backed out of those plans because… Read more »

Cheesy, you are partly right .. the Owens valley was though, a good valley to make a living in, and a lot of families did. But, it was not the harshness of the high desert that forced some to sell out. It was the depression, anyone who knows something about… Read more »

Benett, that’s just what I have gathered from locals, and reading stories of the local families in the valley, and what I know of the depression times. Am I incorrect, or correct?

The land grab happened before the depression hit.
BK

Benett you never answered my question .. and for the record I do not support what DWP has done or is doing to the valley.

I firmly believe they need to be held accountable for their actions.

I did answer your question. The land grab happened before the Great Depression.
You might want to read Water and Power by Bill Kahrl.
BK

Reasonable speculation. I’m sure the LADWP never turned down an opportunity to acquire more land. But the Depression was in the early 1930’s and LADWP had already acquired all the water rights they needed by then and had already shut down most of the agriculture. In fact, in the ‘1930’s,… Read more »

Big Al- I believe your timeline is mistaken. Most everything happened well before the Great Depression.

Which depression? That aquaduct was already 16 years old by the beginning of the Great Depression.

Hold on now, the great depression did not happen over night. There were many reasons the City of L.A. got away with what they did. Most of those reasons lead to our great depression and our great repression that we are possible still in now. I think Big Al is… Read more »

Try looking at what Israel did in the desert with a little water. This “Desert” had lots of water for farming.

When the truth and the image collide, screw the truth, right Cheese?

There is more to this than 5 million. DWP is getting more , it may not be money it is something.

Water Boy
Reply to  what next

Al Capone would be proud of this LADWP shakedown of Mammoth!

Ah ,” The Truce” The link for the LA Times “all the news fit to print ” http://www.latimes.com/news/local/la-me-aqueduct-20130203,0,7466364.story Sorry to post again to another Sierra Wave LADWP Article, but the link to the story in the Times is interesting and important enough to read first hand. The idea that LAWDP… Read more »

This is political theater by DWP for consumption by the masses.