By News Staff on October 29, 2012 in Government Agencies/Utilities 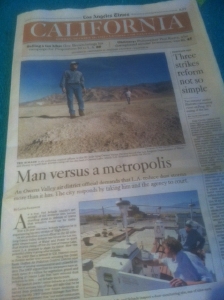 The Los Angeles Times focused on one man in the Owens Valley in the Sunday edition. Reporter Louis Sahagun compared Air Pollution Control District Director Ted Schade to Gary Cooper in the classic film, “High Noon.” Schade’s battle, not with old west villains, but with the Los Angeles Department of Water and Power.

The article ran on the front page of the California section and tells how Schade has enforced air quality laws and signed agreements to clean up the Owens Dry Lake dust and now, how LADWP has gone after Schade. The story reports on LA’s new federal lawsuit against the EPA, California Air Board, State Lands Commission, BLM and APCD. The Times points out that the lawsuit does not name Ted Schade personally but that DWP has gone after him with accusations of unfair regulation. They want him out of the picture.

The article says “The attacks have left Schade in a position he didn’t expect – abandoned by many Owens Valley community leaders and environmental activists.” The reporter explains the lack of public support when he writes that “In a place where LA owns most of the land and water and has a grip on the region’s economic stability, few people were willing to comment about the man whose career is on the line.”

Mono County Supervisors Larry Johnston did offer support to Schade. Johnston is chairman of the local air board. The Times said Johnston described Schade as “our guy.” Owens Valley Committee Director Mark Bagley said, “Ted has a reputation for being a straight shooter.” And, a surprising voice of support also came from David Freeman, a luminary in the water and political world who worked as DWP General Manager in 1997 when the dry lake deal was signed.

Times reporter Sahagun quoted Freeman as saying that Schade is just a bureaucrat enforcing the law. Freeman was also quoted as saying, “Ever heard of a polluter who didn’t claim a regulator was biased?”

The Times article goes on to describe the dispute over the dry lake – Schade’s position that he is enforcing the law and DWP’s gripes about the cost and the extent.

Not everyone shares the opinions above. Some of us feel Mr. Schade has gone too far with his power. The need for dwp to treat dust at ancient Native American sites that were there long before dwp, one has to wonder where this man is headed. Supervisor Johnston who supports… Read more »

Throw the bum out
Reply to  Jon

Don’t get me started on Supervisor Johnston.
I’d be here all day long.

Will the Inyo county board of supervisors join the fight for their citizens? Sadly I doubt it, and I know I’m not alone with those doubts. The voters of Inyo and Mono county need to replace their elected officials that support DWP’s lies and crooked ways, Meanwhile we can all… Read more »

Surely the incoming new ones will! Mono has 3 new ones, Inyo has 2, maybe 3.

Mr. Schade appear to be doing a fine job and an LA Times article really doesn’t reflect the views of Owens Valley locals.
I’m sure we won’t be hearing a Beaurcrat Beat article about Mr. Schade for a while.

Mr. Schade is the only Inyo official who has demanded LA live up to its word, the law, and its agreements. Bureaucrat Beat has no criticism for him. We fully recognize that there
are honorable, valuable public servants (bureaucrats).
Benett Kessler

Kinda cool .. to read that people in LA are not so dumb to the fact that their city’s water district is trying to pull the wool over their eyes, to get them all to support them. So .. you see, there is a glimmer of hope there, that we… Read more »

If you ever need some help Mr. Schade you can count me in.

With Mr. Schade in mind, thank goodness for bureaucrats that are able with strength and dignity to do their job exceedingly well. No disrespect BK but, ” People whose salaries we pay, look what goods and services we get” plus more. One individual singled out by the DWP holding the… Read more »