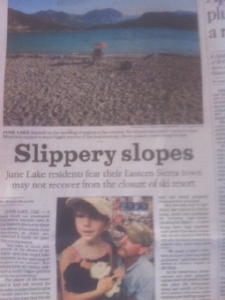 A Los Angeles Times reporter made the trip to June Lake where business owners were quoted as saying they don’t think many will make the trip come winter with June Mountain closed. The Times quoted Don Morton, manager of June Lake Accommodations as saying, “If the mountain closes we are dead.”

Mammoth Mountain CEO Rusty Gregory made the clear announcement that the company did close June Mountain because of annual $1.5 million losses. The Times’ June Lake story, called “Slippery Slopes”, revealed a not surprising picture. The story quotes June Lake people as saying that their property values have dropped at least 10% since the announcement and that some hotel workers are planning to leave town in November.

The story says, “June Lake is a throwback to ski towns of a quieter era.” Rusty Gregory is quoted as saying that June Mountain has lost “$500,000 to $2.5 million annually since Mammoth bought it in 1986.” Gregory told the Times that June Mountain must bring in about 150,000 skiers per year to make money. The numbers have flagged around 45,000.

The need for more lodging rooms came up and so did the failed Rodeo Grounds 900-unit condominium project. Intrawest gave up on the project in the midst of community dissent and a failing economy.

The Times’ story reveals the town’s suffering and points to no answers for this winter. Locally, talks continue over possible solutions. See LA Times story:  http://www.latimes.com/business/la-fi-june-lake-20120725,0,3265113.story

We work to provide daily news to all of the Eastern Sierra, in the tradition of Eastern Sierra News Service and the Sierra Wave. We bring you daily happenings, local politics, crime, government dealings and fun stuff. Please contact us.
View all posts by News Staff →
Luman firing upheld on allegation of threat
Settlement conference for Adventure Trail lawsuit
33 Comments
Newest
Oldest Most Voted
Inline Feedbacks
View all comments

“Reality is for those who lack imagination” (attribution unknown)

“Ken Warner July 26, 2012 at 8:23 am # There’s other ways for an economy to become more robust. Adaptation is one way. Adapt to the needs of the World around you. And those needs are less and less for tourism from SoCal when people from SoCal can be anywhere… Read more »

It’s all about me.

I can see intellegent converstion has left the room…

Hi,
Does anyone know or can anyone find out how may MVP holders there are for the 12/13 season?

as a longtime mvp pass holder, I want a discount/refund on my 12/13 pass. I paid for a pass with access to two ski resorts….now I only have access to one. June was the perfect place to go on crowded weekends… I expect 20% back on my pass…come on MVPers,… Read more »

I spoke with mammoth mtn, they will do nothing for you, except give you a complete refund! Bogus. And what about those people who planned on buying a June only pass so they didn’t buy the MVP pass? Shouldn’t mammoth re-open the mvp pass sales for people who had planned… Read more »

And June Mountain didn’t lose “$500,000 to $2.5 million annually since Mammoth bought it in 1986.” MMSA lost that money. Blame the perpetrator not the victim.

Communities are either growing or dying. There is no standing still. June blew it years ago (ie Don’t Mammoth June) and now has to live with the effects. This is not rocket science.

Nonsense! That’s the lie big developers tell you so they can rape your town like they’ve done to Mammoth Lakes. There’s other ways for an economy to become more robust. Adaptation is one way. Adapt to the needs of the World around you. And those needs are less and less… Read more »

just one
Reply to  Ken Warner

Ken Warner
Reply to  just one

Exactly! I moved here to get away from the city life — not to be taxed to bring it up here. In the 12 years or so I’ve lived here, the quality of life has taken a nose dive into the same rat race that is everyday life in SoCal.… Read more »

Lets look how the Piutes in Bishop have faired…….still no sewage and electrical on most part of that rez.

esfotoguy- you are really off base on the what’s going on at the reservation. The reservation has grown more in the the last ten years than any city in Inyo has in 60 years. Maybe you should go drive threw there and say hello. While there check out all the… Read more »

What decade are you referring to esfotoguy?

A casino?…do you think this is a joke?….Gamblers by definition are losers. I dont want a bunch of losers hangin round my town.

gambler
noun
1. better, punter, backer “The British are a nation of inveterate gamblers.”
2. risk-taker, speculator “Never afraid of failure, he was a gambler, ready to try anything.”

Actually, a “gambler” sounds more like a skier. Yeah, your right! We don’t want them skiers hanging around June Lake anymore!

esfotoguy, dude, there already are a bunch of losers in June. Of course not everyone is but there are many losers in June. Why do you think they call it Loop Land? At least gamblers have money to spend, the losers live off of welfare, unemployment and disability.

This is an unfair judgment. Things happen in life, to all of us. We humans are certainly not perfect. But kicking someone when they are down
is not an honorable way to relate to fellow humans.
Benett Kessler

This is one of the reasons why I believe we all or at least the ones that say rediculous comments (I myself am not immune to rediculous comments) should put down there real name so they can own what they say!
I agree, Dingo that is a very unfair comment!

B, many choose to live off public assistance with no desire to get off the couch and be a productive member of society. These are the losers I am speaking of.

Gotcha,
this day and age where we can be anonymous on internet blogs leaves room for the inner child to run free.

You crack me up Al Grande.

Do the “winners” in Mammoth Lake consider the people in June Lake as the uneducated residents of the county,like they do the people in Bridgeport too ?

Yeah, Vince Townsend.
Slots ‘n Slopes would be the first of its kind in America.
An instant money-maker.

Ah, ‘slots & slopes….first in America’ — Really? What, you’ve never been to Lake Tahoe?

They should persuade the Bridgeport Tribe to open a Casino there, that would provide an instant 40 to 80 jobs jobs jobs 🙂 That’s the American Way!