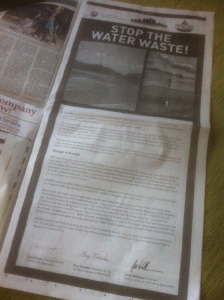 Over the years, the Los Angeles Department of Water and Power’s wholesale water diversion from the Owens Valley dried up the Owens Lake and created what has been described as the worst dust pollution of its kind in the western hemisphere. Now, DWP wants no more responsibility to clean up the remaining dust, appealed a local order to the state air board, filed a federal lawsuit, pushes advertising to demonize the Great Basin Air Pollution Control District and its director and has reportedly authored a resolution for the LA City Council to support their tactics.

In a full-page ad in the Sunday Los Angeles Times on page 11, the LA Chamber of Commerce and two other LA business groups use DWP’s words to blame the Owens Valley for trying to protect the health of citizens from dust that still violates federal clean air standards.

The ad claims the APCD orders to clean up 2.9 more square miles of the dry lake “violate the law” and that LA did nothing to cause the dust. In an earlier statement, APCD Director Ted Schade said state of the art monitoring methods approved by LADWP “show that controls are required on an additional 2.9 square miles of dried lake bed” and that LA caused the dust. Schade said DWP signed an agreement which included this process.

The big LA Times ad says LADWP has had to spend $1.2 billion on the lake clean-up. Ted Schade earlier pointed out that over a 25-year period, the cost of controlling Owens Lake pollution is about $2,000 per ton. The air quality district in LA, he said, has set a feasible cost effectiveness limit of $5,300 per ton for particulate matter control in its area. Schade said, “If Owens Lake were located in the San Fernando Valley, instead of the Owens Valley, LADWP would be expected to spend up to $5 billion to control the problem.”

The LA Times ad complains that customers are paying two months of an average water bill for APCD lawyers and bureaucrats. What the ad doesn’t say is that LADWP’s refusal to abide by its signed agreements and clean-air laws, according to local officials, has caused the legal fight, the need for regulation and the money to pay for it.

The ad alleges that Ted Schade has forced DWP to use fresh water to keep down the dust. The facts are DWP could use water, vegetation or gravel to control the dust or develop another method. The polluter has responsibility to develop control methods.

Schade said LA would apparently prefer to pick legal fights and delay responsibilities. He had earlier said DWP Manager Ron Nichols told APCD Board Chair Supervisor Larry Johnston that “The cost of legal fees pales in comparison to the cost of dust controls.”

It’s an issue, said Schade, of “an historic problem LADWP has with its credibility in keeping promises.”