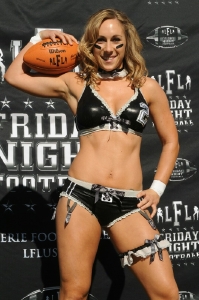 Melissa Margulies carried out one of the winning touchdowns in the Las Vegas championship game to take the LA Temptation team to victory, 26 to 25. They beat out the Philadelphia Passion team by one point.

The Lingerie Football League includes all female players who go for a real tackle football game, wearing only the essentials.

Melissa joined the team last year and has turned out to be a stand-out player. She graduated from Mammoth High School in 2006 and then from USC. Melissa was a star track athlete in high school and college. She also works now as a personal trainer in Hermosa Beach.

Proud parents Marc and Lou Margulies were in the audience at the Lingerie Bowl in Las Vegas last Sunday. Marc said it was super exciting. The game did air on pay per view.

With a championship under her belt, Melissa will stay with the LA Temptation another season.

We work to provide daily news to all of the Eastern Sierra, in the tradition of Eastern Sierra News Service and the Sierra Wave. We bring you daily happenings, local politics, crime, government dealings and fun stuff. Please contact us.
View all posts by News Staff →
Mono Sheriff-Coroner investigates death
Lots of vacancies at the top in Mammoth town government