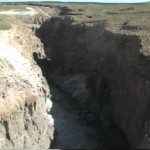 The agreement, now filed and approved by the Mono County Superior Court, governs Owens River flows in the 19 mile reach between Crowley Lake and Pleasant Valley Reservoir, and protects the Owens Tui Chub, an endangered species, in the upper gorge, its designated “critical habitat,” as well as brown trout in the lower reaches of the Owens River Gorge.

While the flows required by the agreement will replicate the historic seasonal patterns, at volumes shown by scientific studies to be sufficient for fish to survive in good condition, they will also permit Los Angeles to continue production of hydroelectric power and to maintain Crowley Lake for recreation and storage. The resulting Court Judgment also provides for Los Angeles to pay $495,035.00 to fund monitoring of conditions in the Gorge and verify compliance with the agreement.

Ironically, it was a coincidence of court decisions involving Mono Lake and the Mono Basin, and a rupture of the pipeline diverting the Owens River to power facilities, which led to the 1991 lawsuit.

In the late 1980s, courts faced with litigation over the ultimate fate of Mono Lake determined, in effect, that the protection of the public’s natural resources takes priority over a water user’s other plans (an application of what is referred to as the “Public Trust” doctrine). In 1991, when the Owens Gorge diversion pipeline broke in Mono County, flooding the tablelands and restoring water to the Gorge, it forced recognition of the natural resource damage that had occurred from years of drying up the Gorge river bed. The then Fish and Game Department presented its case to the Mono County DA, and charges relating to a dam owner’s obligation to protect downstream natural resources were filed.

An Interim Agreement for temporary flows was then entered, and a prolonged period followed for scientific studies to establish a flow regime that would maintain fish in good condition, and yet allow continued production of hydroelectric power and maintenance of Crowley Lake. During this time, the parties met periodically to share and debate their scientific findings. Ultimately, a permanent flow regime was established, and there followed another prolonged period during which the parties negotiated terms for flexibility to accommodate changed circumstances and unforeseen consequences that would allow the agreement to remain in place in perpetuity. The California Department of Fish and Wildlife was then added as a party, and the final agreement was presented to the court and put in place as a court judgment. Now, the transition to permanent flows begins with a two year period for Los Angeles to make necessary infrastructure changes to accommodate the increased volume of flows in the Owens River Gorge.

The final agreement was entered as a Court ordered judgment and permanent injunction on January 7, 2015, roughly 24 years from the date proceedings were initiated in 1991. During that time the case passed from Mono DA Stan Eller, to his successor George Booth, and on to the current DA Tim Kendall. Mono County was initially represented by James Reed, who was followed by current Mono County Counsel Marshall Rudolph. LADWP was also represented by a succession of counsel before the matter was successfully completed by Deputy City Attorney Vaughn Minassian. The California Department of Fish and Wildlife transitioned from consulting agency to Intervener through staff attorney Nancee Murray and representation by California Attorney General Kamala Harris through Deputy Attorney General Marian Moe.

The award for longevity goes to Steve Parmenter of the California Department of Fish and Wildlife, who, as a biologist, has been engaged in these proceedings from the outset, in both his scientific capacity and as a consultant for all dimensions of this precedent setting matter. The successful permanent resolution of this important matter is in no small way due to his able and ready assistance, if not persistence. He is the last standing of the very competent team of Fish and Wildlife personnel who contributed to restoring natural resources to the Owens River Gorge.

Historically, the Owens River Gorge has been known as an exceptional brown trout fishery. A sixteen mile reach of the Owens River below Pleasant Valley Reservoir has been designated by California as a “wild trout” area, requiring LA to maintain sufficient flow to support that fishery as well.

I’ll start by saying I am not a Ladwp apologist but this headline which was repeated in the Sheet as well is VERY misleading.

Don’t bite the Hand that Feeds you people ☺

It took 24 years, way to go everyone involved! =

Great article. Darrell Wong, Senior Fishery Biologist DFG in 1991 was the one who deserve a mention the most. He is the the person who started it all. He is my hero, just like Phil Pister, who saved Lower Rock Creek.