Not exactly a Huck Finn raft trip down the Mississippi, but Los Angeles Mayor Antonio Villaraigosa did not pass up a boat ride down the Lower Owens River on high, flushing flows set to start Wednesday. 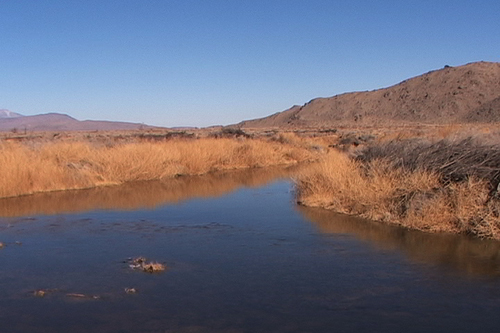 River waters have flowed for more than a year, and officials will now release a major flushing flow to mimic spring run-off. They call it a seasonal water release and inspection tour.

Officials planned to gather at the Los Angeles Aqueduct intake near Black Rock with plans for the Mayor to release the additional flow which will eventually build up to 200 cfs.

Since the original release in December of 2006, waterfowl have returned to the river and habitat has begun to grow up. Officials say that the higher flows will scour the riverbed by design, recharge groundwater and maintain river channel levels.

We understand that engineers and others will keep a close eye on the high flows, particularly as they may edge close to Highway 395 in Southern Inyo.

Mayor Villaraigosa had stated that the environment remains a priority for him – even the Owens Valley environment. This event comes on the heels of the visit to Mammoth Lakes by LADWP CEO and General Manager David Nahai, who was the keynote speaker at Andrea Lawrence's ALIMAR award's dinner.

Inyo officials, members of the LADWP commission, Nahai and representatives from the environmental community were expected to join the Mayor in release of seasonal flows, followed by a boat trip down part of the river.

Los Angeles media were expected, too.

We work to provide daily news to all of the Eastern Sierra, in the tradition of Eastern Sierra News Service and the Sierra Wave. We bring you daily happenings, local politics, crime, government dealings and fun stuff. Please contact us.
View all posts by News Staff →
Bureaucrat Beat: Building Trust with DWP? and Postal Fears
Mammoth Gun Arrest Update