Advocates to increase the amount of motorized boat access on Klondike Lake are encouraged after the recent Inyo Water Commission meeting. 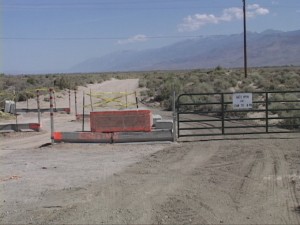 Russ Markman, who heads the Save Klondike Committee, reports that the Inyo Water Commission now supports their efforts on the lake. The Water Commission, appointed by the supervisors to advise the Board on water issues, plans to formally draft a letter to the Board of Supervisors asking that Klondike Lake be kept open with reasonable access, he reports.

The LA Department of Water and Power had closed Klondike to motorized boating out of fear of the invasive and destructive quagga mussel. Faced with pressure from those that use motorized watercraft on the lake DWP staff worked out and inspection system and limited hours for boating at Klondike.

DWP closed the lake to boating for the season after Labor Day. Markman says that he and the Klondike Committee will continue to push for reasonable access to Klondike Lake, including a longer season. He says that boaters are happy to be inspected, and has asked that boaters be allowed to be re-tagged when they leave the water so they dont need to be inspected again as is allowed at Crowley and Diaz Lake.

This proposal may face financial considerations from LA as DWP officials have cited staff costs as a reason to limit boat hours at the lake.

This issue, now with water commission support, is expected to head back to the Inyo Supervisors in October. What weight the Water Commission holds with the Supervisors is yet to be seen.

We work to provide daily news to all of the Eastern Sierra, in the tradition of Eastern Sierra News Service and the Sierra Wave. We bring you daily happenings, local politics, crime, government dealings and fun stuff. Please contact us.
View all posts by News Staff →
Communication Breakdown Over Bears is Part of the System in Mammoth
Celebration of Life For John Bachar Saturday