Mammoth Lakes – Kitchen 53 won the “Golden Ticket” to compete in the 2015 World Food Championships during the first annual HWY 395 Band & Burger Battle at the Village at Mammoth on Saturday, July 18, hosted by Mammoth Lakes Foundation. 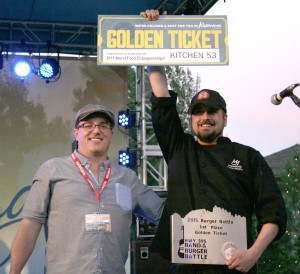 The Eatery took home the “People’s Choice” award from the field of six that included CJ’s Grill (last year’s winner), Basecamp, Rafters, The EATery, and Lakanuki. Blind judging was based on appearance, flavor, the bun, texture, and whether or not they would purchase it. Kitchen 53 will be among 50 burger competitors at the Kissimmee, Florida event. The Saturday festivities included the Mammoth Lakes band The Lost Boys that won the band portion of the battle on Friday, July 17, and local band Inebriated Oracle, that took second.

The Battle of the Bands On Friday, July 17, three bands—Inebriated Oracle, The Lost Boys, and Rian and the Roosters—competed on the Plaza Stage in the Village at Mammoth in the final round of the battle of the bands. Each band won their preliminary round earlier in June and July at competitions held at Rafters.

Attendees voted with their dollars for the band they wanted to return for an encore on Saturday. The Lost Boys garnered the most dollars, followed by Inebriated Oracle. Each dollar was a donation to Dave McCoy’s nonprofit, Mammoth Lakes Foundation, which supports higher education and the arts in the Eastern Sierra.

The Friday evening portion of the first HWY 395 Band & Burger Battle concluded with a fantastic performance by Southern California’s reggae-rock band, Ease Up.

Because HWY 395 Band & Burger Battle is a Preferred Qualifying event for the 2015 World Food Championships, MLF will pay Kitchen 53’s registration fees and a $1,500 stipend to help cover travel expenses to Kissimmee, Florida.

By competing at the competition, Kitchen 53 has the opportunity to win up to $100,000, among other prizes. Attendee’s during Saturday’s burger battle participated in the “People’s Choice” award by voting for their favorite burger with coins handed out by the Mammoth Lakes Foundation. At the end of the competition, The EATery had the most coins and took home the bragging rights of “People’s Choice.”

The evening concluded with an upbeat performance by Illinois band, The Giving Tree. HWY 395 Band & Burger Battle grew out of the Mammoth Food & Wine Experience’s previous burger battle events. The event, produced by MLF, teamed up with Fathead Productions and The Village in Mammoth to provide a dual battle of the arts: one in culinary, and the other music.

The two-day event supports MLF and its ability to offer free college education (books and tuition) to any Mono County high school graduate or resident pursing an AA degree from Cerro Coso Community College and to provide year-round theatre programming through the Mammoth Lakes Repertory Theatre.