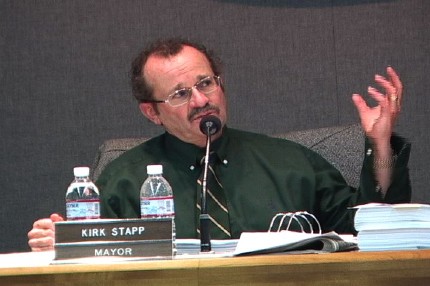 Former Councilman Kirk Stapp believes he has a contribution to make.

Stapp had earlier said that he was considering a run for office, but he says that the Community Benefits and Incentive Zoning issue spurred him into the race.

As the new town Community Benefits and Incentive Zoning policy moves into practice on the Old Mammoth Place project, Stapp says that he sees the town giving up what would have been $3.5 million in Developer Impact Fees and $2.5 million in affordable housing fees that would have gone to public projects. Instead, the town will get community benefits built as part of the project, such as underground parking, a road through the project, a conference center, and a plaza, Stapp explained.

He adds that before the Community Benefits Incentive Zoning policy was created, many of these benefits, would have been requirements, and he wonders how the town will back fill the Developer Fees, Housing Fees, and Public Art Fees that this project would have paid in the past.

Stapp says that these developer fees were set as town ordinances, while the incentive zoning was set as a policy decision. In his view, the town legally cant do it.

Stapp says that he doesnt think the current council is, digging into the issues.

We work to provide daily news to all of the Eastern Sierra, in the tradition of Eastern Sierra News Service and the Sierra Wave. We bring you daily happenings, local politics, crime, government dealings and fun stuff. Please contact us.
View all posts by News Staff →
Inyo Drug Court- Five Years of Changing Lives
Renn Nolan Goes for Mono Supervisor Seat