Bob Kingston met with area media Tuesday to address some of the concerns expressed by neighbors to his proposed 15-home subdivision on Home Street as well as his commitment to keep Bishop Nursery a part of the community. 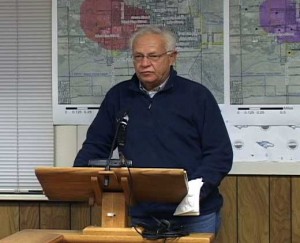 The meeting took place the day after the Bishop City Council accepted the Revised Initial Study and Negative Declaration. The project now goes before Bishop’s Planning Commission and then back to City Council for the final word.

Kingston bought the nursery, operating on a Los Angeles Department of Water and Power lease since 1979, in the late 1990s. “The building burned down a couple of years after I bought it,” he said. “Against financial advice, I rebuilt it. This is an enjoyable business. The people who come in here are in a good place, working outside on their yards.”

Faced with competition from nurseries in Mammoth and Chalfant, Kingston was faced with a decision. What made the most sense was to downsize and relocate Bishop Nursery, buying the land from LADWP and using the 2.5-acre parcel for housing. The property was in escrow, pending approval of the project, as of last summer.

His statement that “Bishop needs housing” was reflected in the recent Economic Development plan amendment as well as by Northern Inyo Hospital’s former executive officer in her quarterly report to City Council, at the same meeting when Kingston’s project was initially reviewed. Victoria Alexander-Lane told Council she had trouble recruiting doctors to NIH due to the lack of housing. “People thought I rigged that,” Kingston told members of the press. “I didn’t.”

Bishop Nursery will stay open through this summer, Kingston said. He hasn’t figured out where it will go, but he said he was committed to keeping it in Bishop.

As for specifics on the development, the homes will be built by Kingston and sold, as opposed to earlier references that the project would be owner-built. His goal is to build a consistent, quality development. From an economic perspective, Kingston said 15 lots made sense.

Issues raised by neighbors to the south of the development led the City to further study the environmental issues, bringing in Bill Taylor as a consultant. Additional mitigation was required following the Revised Initial Study, all of which Kingston accepted. “Out of respect to the people on Rome Street,” he said, “all the homes on that side of the project will be single story.” Mitigation included a 6-foot sold fence and additional trees on the south side of the project.

The objections presented at Monday’s board meeting focused on required variances for street dimensions and density. Kingston said he spoke to Bishop Volunteer Fire Department Chief Ray Seguine regarding the narrower-than-required road into the development and “he said the street was acceptable.”

There is inconsistency in the density designation on the property. The zoning ordinances have one density, the General Plan, another. One would allow medium density or the 15 homes, the other identified the plot as low density which would limit the development to 13 homes.

Jake Rasmuson of Coldwell Banker provided information on lot sizes in the area west of downtown Bishop. “Most of the lots are 50 x 100 feet,” he said, “or 5,500 square feet. The average lot size in the development is 6,200 square feet. Some are smaller but others are significantly larger.” According to Rasmuson, some residential lot sizes are as small as 1,600 square feet.

The homes will be sold at market value. When pressed for something more specific Kingston said “somewhere in the $300,000” range. No decision has been made on the general contractor as yet, but Kingston said the general probably won’t be a local due to the size of the project. Kingston wants to get started building out the project as quickly as the process allows.

As the developer, Kingston will craft the subdivision’s CC&Rs. After the sell-out the Home Owners’ Association will be the governing agency.

In Bishop the standards for “good old boys ” are found under the “grandfather clause ” in the nonexistent section of the zoning regulations.

Any property owner should have the right to utilize their property as they see fit as long as it meets the law. Seeing as there is a discrepancy in the density (13 vs.15) perhaps they should approve the lower of the two. I do question the the Fire Chief’s response… Read more »

Trouble,
Better to figure out how to attract better paying jobs to the area than settling for a low income lifestyle.

I’d agree with that Desco.

The Realtor is for it, because he’s a realtor.✔

Kingston is for it, because he’s making a huge return on his investment.✔

Subdividing the lot into 4 units @ market value is not solving the housing situation. ✔
It’s a money grab pure and simple✔

There’s nothing wrong with making money in our capitalistic society. “check”

Nothing wrong with making money….but IMO……not so much if you base your life around doing it….spending all your waking hours working..hoarding what you do make and doing without….holding a job untill your too old to enjoy life much…or untill you die of old age.Maybe none of my business when I… Read more »

Good, now maybe our council people will focus on stuff we really need. Like sidewalks and low income rentals.