Bob Kingston’s 15-home subdivision on the Bishop Nursery site on Home Street raised a lot of heat from neighbors on Rome Drive over the last six months. Much of that heat had cooled by the Planning Commission meeting Tuesday evening. 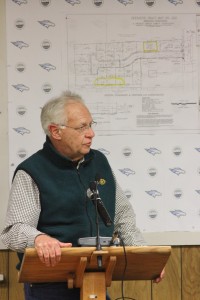 While some of those neighbors assumed “the subdivision was a done deal,” the clincher seemed to be an agreement between the primary opponent Terrance Tye and Kingston reached earlier Tuesday.

Tye read off the elements of the agreement, much of which had been touched on in the Revised Initial Study Mitigated Negative Declaration, approved by City Council earlier this month. Two of those elements – homes across Bishop Creek from Rome Drive residents would be single story and a six-foot, solid concrete block topped with two feet of lattice would be built to shield homes from Rome residents – were added to the City’s Conditions of Approval.

The conditional use permit was approved 6-0; approval of the Tract Map passed 4-2. The subdivision map now goes to City Council. 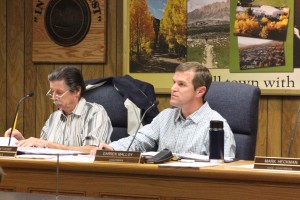 The variances under discussion were: a 42-foot right-of-way rather than 60-foot, subtracting the planter strip and sidewalk on the first 250-feet on the south side of subdivision road; a 28-foot radius hammer head turn-around rather than a 50-foot radius cul de sac; less than the minimum 7,500 square foot lot size for 11 of the homes and less than 50-foot frontage for two of the homes on the turn around.

Following Kingston’s brief statement, project engineer Andy Holmes of Triad/Holmes Associates, Inc. explained the rationale behind the request for variances, which boiled down to maintaining an R-1 residential development within the constraints of the 2.75 acre lot. The street into the subdivision abuts the Los Angeles Department of Water and Power property south of the current Bishop Nursery parking lot. Lots 14 and 15 run along the road. “If the street right-of-way width went to 60-feet, those lots would be too narrow for R-1,” Holmes said. “We had the option of condos or apartments, but Bob wanted it R-1.”

Holmes’ background includes participation on Inyo County’s advisory board for its General Plan and Housing Element. According to Holmes, some of Bishop’s zoning is unique to Bishop. Planning Director Gary Schley said the city intended to update zoning ordinances in the very near future.

Commissioner Robert Lowthorp asked each of the ten public commenters if they approved of the project. All but three did in principle, but had concerns about the variances for safety reasons. Two did not approve of the project and Tye would not answer the question.

When Chair Darren Malloy closed the public hearing and began the Commission discussion, Lowthorp asked the most obvious question: If this is a private street, why are we paying so much attention to it? Schley reminded him of one of the requested variances to Bishop’s ordinances—private streets had to comply with public street standards.

Commissioners came up with suggestions to solve the no-sidewalk on the south side of the first 250-feet or street. Malloy put the issue in perspective. “This is a 42-foot wide road that goes nowhere. There will be no through traffic. This is a dead-end street with a 15 mph speed limit.” In response to speakers’ mention of Bishop’s apparent obsession with sidewalks, Malloy said the obsession was driven by Safe to School grants.

None of the commissioners were too concerned about the absence of planter strips.

One of the little Bishop quirks was that if the lots were developed individually, the minimum would be 5,000 square feet; but ordinances required a development’s minimum lot size be 7,500 square feet. “Forty-year old ordinances are hard to change,” Malloy said. “That’s why we have requests for variances.”

The only hint of excitement came in regards to the Tye/Kingston agreement over fencing along the Rome Drive side of the development, which would end up eight feet tall. City Counsel Ryan Jones suggested that height may require another variance which could not be voted on that night as it was not agendized. Jones and Schley found fence height ordinance wording; Jones said the agreement stipulation could be added to the Condition of Approval.

To experience life in a state with no or little public lands go to Texas. Locked gates everywhere, no trespass signs. No real 4×4 opportunities, quads or bikes only at pay-to-play OHV parks. To hunt or fish must join a club with access only on the paid for and assigned… Read more »

fingerpaint….I’m not going anywhere..I’m doing fine where I’m at…when I happen to drive on a dirt road,it doesn’t bother me a bit that it might be owned by the Government…. I’m maybe not living the “American dream “,as far as a big fancy house with 2 fancy vehicles and a… Read more »

Ever occur to anyone that this illegal immigration (invasion) is done by design. Corporate America with the help of Politicians (D)&(R) are doing this to lower job wages and crush the middle class. H1b visas included. So, now If I’m a software company for example, I can choose between some… Read more »

There are plenty of dirt roads not owned “by government”. Most of them have locked gates keeping everyone out.

If the “American dream ” is dead for many in the Eastern Sierra,as you say,only one thing left to do…..move….and be seeking it somewhere else….that you owe to yourself..

Very much agreed Low-Inyo! Not every place is for everyone. There are many cheaper options in other parts of this country than this area. This is a special place that costs higher than average to live….as it should.

And now on to all the other State and City building code requirements…if anyone wonders why housing costs so much, here is a prime example.

Jason, yup yup.
Which is partly why the American dream is dead for many in the Eastern Sierra.

Ok, I’ll give you that it’s part of the equation, but certainly not the main part. I think CEO’s making 300 times the average workers instead of paying a living wage to workers is the number 1 reason why the american dream has gone down the tubes. If you work… Read more »