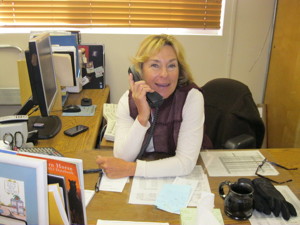 Providing safety, service, and security throughout the state, is something you hear about California Highway Patrol (CHP) officers doing on a daily basis.  However, have you ever wondered who helps those officers do their jobs on a daily basis?  Statewide, the CHP employs approximately 7,700 uniformed personnel and approximately 3,400 non-uniformed personnel.  The non-uniformed personnel of the department are crucial to the everyday functions of the CHP.  This group includes Office Services Supervisors, Office Assistants, Public Safety Dispatchers, Commercial Vehicle Inspection Specialists, Automotive Technician, Maintenance Workers and a myriad of other people providing expertise in specific areas.  Without the hard work and dedication of all of these people, the CHP would not be able to provide the public with the high level of service that it provides daily.

The CHP Bridgeport Area wishes to announce the retirement of Office Services Supervisor Gretchen Montgomery, on December 30, 2013.  On that date Gretchen will have been with the CHP for 24 years, 13 days.  Before Gretchen came to the CHP she was a snow plow operator for Caltrans here in the Eastern Sierra, and worked at several other local businesses.  She started at the CHP’s Bridgeport Area December 18, 1989 as an Office Assistant and then promoted “in place” to Office Services Supervisor during May, 1996.  Gretchen has guided and assisted 11 commanders, most taking their first command.

Gretchen enjoys anything outdoors, and continues to be a competitive horseback rider, often traveling hundreds of miles to competitions.  In the attached photographs Gretchen is riding “Coquette” (on the left) this past June, and “Spice” (on the right) in 2012.  Gretchen is “the CHP” in Mono County, and she will be missed not only by CHP employees, but by many other public safety partners, local business owners, residents and the thousands of visitors that have stopped in the office to ask for directions to Yosemite, where chain control starts, where the natural hot springs are, when it will snow, etc., etc!!  Gretchen’s last full day in the office will be December 23, 2013.