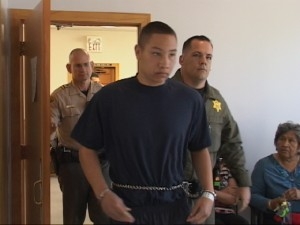 Inyo County court has denied Edward Keller, jr. a new trial and has sentenced him to 16 years to life in the beating death of James Williams in a home on the Bishop Indian Reservation on Thanksgiving, 2009.

Keller was 17 at the time but treated as an adult in court. Testimony described the scene in 2009 as a drunken, violent night in a home on Barlow Lane. Sheriff’s Officers said that Keller confessed to killing Williams by striking him with a weight bar.

In April, a jury found Keller guilty of second degree murder. After that time, Keller’s public defender, attorney Tom Hardy, filed a motion for a new trial. At the time, Hardy had said that he was pursuing all leal options for his client.

The motion for a new trial was denied July 19th. The court sentenced Keller on July 21st. He received 15 years to life for second degree murder and an additional year for use of a deadly weapon in the commission of the murder.

Attorney Hardy added that he did file a notice of appeal for Keller on the day he was sentenced. Keller headed for the Wasco induction prison following his sentencing.

@ Charles James…actually, my post was much more “than to be annoying or to imply a sense of superiority- reducing your response to that of another person’s spelling on this forum.” If one reads the line of posts from beginning to end, you’ll see Wayne Deja’s very reasonable post and… Read more »

Thanks,HH……Didn’t understand it myself when he said what he did….or to why J.H. wanted me put in prison for 16+years…..

Wayne –
Judge not lest ye be judged.

Lat time I checked,I don’t have any murders weighing on my mind…

No murders weighing on your mind, or modesty either. But why should someone who knows all the answers to all the issues pretend to be modest? You go, boy.

@J.H. – I judge that you don’t know the difference between there, their, and they’re because you used it incorrectly TWICE

H.H.: I’m sure that you are likely a nice person, but was there a point to, other than to be annoying or to imply a sense of superiority- reducing your response to that of another person’s spelling on this forum? Your last comment to J.H. on his “spelling” was clearly… Read more »

HH –
Are you one of those that refers to themselves as conservatives?
Just curious.
Thanks in advance.

Wanye-I was born in the early 60’s and am raising a family with teenagers. They love there sports,school and music and have never been in a ounce of trouble in there life. I don’t believe you have a right to judge anyone but yourself.

I’m quite pleased with the infromaoitn in this one. TY!

We can believe what we want without being judged, but when we act on what we believe, we very well might be judged by twelve of or peers

Then there are those of us so barbaric and wild and confident within our own skins that we could give a damn how others may judge us.

“At the time, Hardy had said that he was pursuing all leal options for his client.”

Ahhhh…., this is all about billable hours. Hardy will fight this to Inyo County’s last dollar. Keller will become a cash cow that keeps on giving.

that’s bunk pal; Tom Hardy is doing his job, and doing it very well; he’s an asset to the community and we should be thankful he’s here to assist in the adminstration of American justice in Inyo County. Thanks.

Dear Wayne D. -who are you to judge? As far as I’m concerned it’s people like you that ought to be locked up. Youth are the same now as they were when you were young. Just not prejudged by fools that assume they know it all.

What a wasted life for a 17 year old,all due to violence brought on by alcohol,probably drugs,and this “gangsta” mentality so many young people seem to have nowdays.Hopefully a BIG lesson for all to learn from…If you got a beef with someone,leave the weapons at home.Once a weapon gets involved… Read more »

If you guys actually knew Eddie you guys shouldn’t talk about him he didn’t mean to kill his own cousin maybe hurt him but not murder he is doing his time In there leave it at that,

He clearly lacks control and should be locked up so the public doesn’t have to worry about him wanting to hurt someone and accidently killing them too.

I’m a bigger asshole then my buddy Wayne

Mark says it perfect with the above post….If this guy got so upset to end up killing his OWN cousin,what does that say for the safety of others NOT related to him ?..The 16+ year sentance in prison isn’t only for punishment,it’s also for the safety of the public.Like I… Read more »

Man…imagine what he would do to someone that wasn’t related to him.

Nothing wrong with that.. Wayne would probably make a good neighbor.